The Dreamer and the Doctor: A Forest Lover and a Physician on the Edge of the Frontier (Paperback) 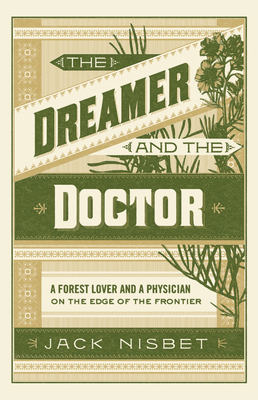 The Dreamer and the Doctor: A Forest Lover and a Physician on the Edge of the Frontier (Paperback)


On Our Shelves as of 9am Today
In the turn-of-the-twentieth-century Northwest, the lives and passions of an American physician and her Swedish naturalist husband helped shape a territory on the cusp of change--from the author of Sources of the River and The Collector.

Dr. Carrie Leiberg, a pioneer physician, fought hard for public health while nurturing both a troubled son and a fruit orchard. Her husband, John Leiberg, was a Swedish immigrant and self-taught naturalist who transformed himself from pickax Idaho prospector to special field agent for the US Forest Commission and warned Washington DC of ecological devastation of public lands. The Leiberg story opens a window into the human and natural landscape of a century past that reflects all the thorny issues of our present time.
JACK NISBET is a historian, teacher, and author focusing on the intersection of human history and natural history in the Pacific Northwest. His books include Sources of the River (recipient of the Washington Governor's Award and winner of the Murray Morgan Prize from the Washington State Historical Society), The Mapmaker's Eye (named one of The Best Nonfiction Books of the Year by The Seattle Times), The Collector (a Pacific Northwest Book Award winner) and Visible Bones. He lives in Spokane, Washington.
“Jack Nisbet continues to educate, entertain, and mesmerize with this meticulously written and researched story of two people-of-destiny whose intelligence and passion transformed our awareness and understanding of the Northwest. Part history, part adventure tale, part love story, part futuristic foreshadowing, this book fascinated me from beginning to end with its eloquence, urgency, and quiet intensity.”
—Kim Barnes, author of In the Wilderness: Coming of Age in Unknown Country

“Jack Nisbet’s The Dreamer and the Doctor is a textured, insightful history of the waning frontier days of the American West that reads like a novel. The featured couple, a female doctor and an obsessed botanist, provide an unusual lens to a time that is both familiar and antique, a time when science and medicine were rapidly evolving but were still intensely personal. Entwined in the narrative are the roots of the battle for Western public lands, the impact of federal science, and a growing awareness of the impact of forest fires.”
—Kirk Johnson, Smithsonian’s National Museum of Natural History

"For more than two decades, Spokane teacher and historian Jack Nisbet has been telling the stories of the Intermountain West. Now he’s turning his careful attention to Dr. Carrie Leiberg and her husband, John Leiberg, who arrived in the Idaho Panhandle in 1885 and homesteaded on the southern tip of Lake Pend Oreille."
—The Spokesman-Review

"Jack Nisbet ought to be declared a national treasure. Over the past twenty years, his interest in the natural history of the inland Pacific Northwest has produced a series of highly readable biographies of early explorers that have enriched our understanding of the natural and cultural history of the region. This latest book, a double biography of the botanist John Leiberg and his physician wife, Carrie Leiberg, shows Nisbet's characteristic attention both to people and to the environment."
—Oregon Historical Quarterly

"Early on in The Dreamer and the Doctor, the reader emerges from a gorgeous description of North Idaho as Swedish prospector John Leiberg must have found it…In the end, this is the story of two flawed, extraordinary people who contributed to our understanding of the Northwest, both of their time but remarkably forward-thinking."
—The Inlander