Seeds on Ice: Svalbard and the Global Seed Vault (Hardcover) 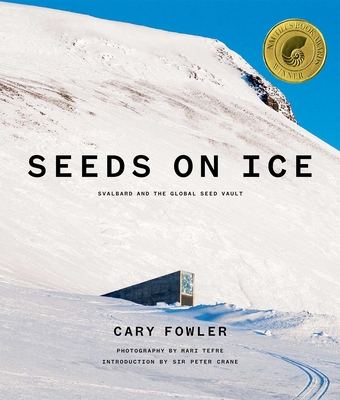 Seeds on Ice: Svalbard and the Global Seed Vault (Hardcover)


Available in Warehouse. Wait for Email Confirmation for ETA
The remarkable story of the Global Seed Vault--and the valiant effort to save the past and the future of agriculture

Closer to the North Pole than to the Arctic Circle, on an island in a remote Norwegian archipelago, lies a vast global seed bank buried within a frozen mountain. At the end of a 130-meter long tunnel chiseled out of solid stone is a room filled with humanity's precious treasure, the largest and most diverse seed collection ever assembled: more than a half billion seeds containing the world's most prized crops, a safeguard against catastrophic starvation.

The Global Seed Vault, a visionary model of international collaboration, is the brainchild of Cary Fowler, renowned scientist, conservationist, and biodiversity advocate. In SEEDS ON ICE, Fowler tells for the first time the comprehensive inside story of how the "doomsday seed vault" came to be, while the breathtaking photographs offer a stunning guided tour not only of the private vault, but of the windswept beauty and majesty of Svalbard and the enchanting community of people in Longyearbyen.

With growing evidence that unchecked climate change will seriously undermine food production and threaten the diversity of crops around the world, SEEDS ON ICE offers a personal and passionate reminder that we shouldn't take our reliance on the world of plants for granted--and that, in a very real sense, the future of the human race rides on this frozen and indispensable biodiversity.

Cary Fowler served as the Executive Director of the Global Crop Diversity Trust from 2005 to 2012. The trust's mandate is to ensure "the conservation and availability of crop diversity for food security worldwide."

Fowler was influential in the creation of the Svalbard Global Seed Vault.

Fowler has received several honorary degrees, including an Honorary Doctorate of Law degree from Simon Fraser University, and an Honorary Doctorate of Humanities degree from Rhodes College. He received the Right Livelihood Award with Pat Mooney in 1985 for his work in agriculture and the preservation of biodiversity. Fowler has also received the Vavilov Medal from the Russian Academy of Agricultural Sciences. In 2010, he was one of ten recipients of the 16th Heinz Awards (with special focus on global change). In 2012, he was awarded the "Wind Beneath my Wings" award jointly with his wife Amy P. Goldman at Bette Midler's annual "Hulaween" party. He was the baccalaureate speaker at the 2013 Rhodes College commencement ceremonies and received the 2015 William L. Brown Award for Excellence in Genetic Resource Conservation from the Missouri Botanical Garden.

Marie Tefre is a Norwegian photographer best known for her work on XLTV (1998), Seeds of Time (2013) and Seed Warriors (2010). In 2003 she moved to Svalbard to work with culture productions and children in the worlds northernmost community, Longyearbyen. She started capturing scenes of the Svalbard nature, society and wildlife. She provided international media with spectacular footage and tv-material from the Arctic in the period 2004 - 2013. Now she is back in Oslo, working with event production at NRK Aktivum.

Richardson's work takes him around the world, from the tops of volcanic peaks to below the surface of swamps and wetlands. ABC News Nightline produced a story about the long process of assembling a National Geographic coverage by following Richardson in the field and at National Geographic Society headquarters in Washington, D.C.