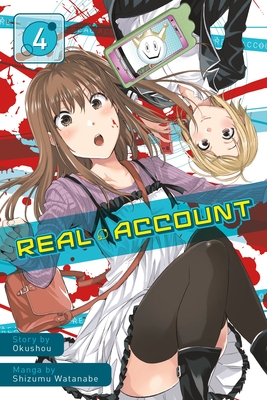 This is book number 4 in the Real Account series.

REPLY OR REGRET
Trapped inside the popular social network, Real Account, Yuma and Ayame must forge ahead and beat a series of seemingly endless death games. First, they'll have to use their wits to appease a monster created by social media, but an even greater challenge awaits them soon after. In "Operation: Reply or Regret" they'll slowly lose sleep or their sanity when faced with the threat of instant death for not replying to messages that could come at a moment's notice. What tricks will Yuma and Ayame pull off this time in the nonstop bloodbath that is Real Account?
Okushou is a writer for television and radio, including several popular variety shows in Tokyo. Real Account is Okushou's manga debut.