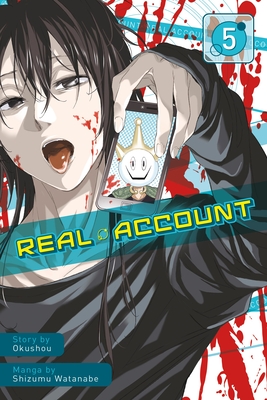 This is book number 5 in the Real Account series.

Yuma, Ayame, and the other players trapped in Real Account are suffering from mental and physical exhaustion as the "Reply or Regret" game drags on. As they fight to stay awake, a game changer arrives in the form of "stickers." Collecting these emoticon images may be the key to outsmarting the game, but Yuma has more than just Marble working against him. On top of the threat of the Real Account servers getting shut down, an unpredictable and sadistic player has his sights set on Yuma...and he won't stop until Yuma is in complete despair!
Okushou is a writer for television and radio, including several popular variety shows in Tokyo. Real Account is Okushou's manga debut.