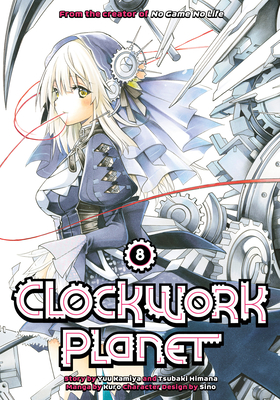 This is book number 8 in the Clockwork Planet series.

The conspiracy plot in Tokyo comes to a conclusion, and Naoto and the crew make their way to crime-ridden Shangri-La on a bold new adventure! Though the world is shrouded in constant mystery, Naoto's incredible hearing skills, combined with Marie's genius engineering, will help lead them to the truth beneath the surface.
Yuu Kamiya is a Brazilian-Japanese creator who started his career as a manga artist but turned to novel writing for health reasons. His No Game No Life series was one of the top-selling Japanese book franchises of 2014, and was adapted into a manga and anime. Clockwork Planet is his second major franchise to be translated into English.