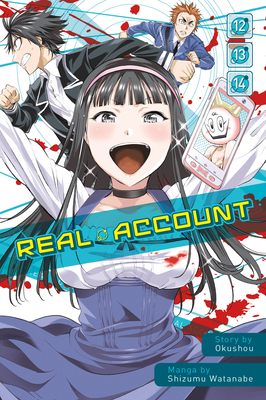 This is book number 10 in the Real Account series.

"If you reach zero followers, you die!" A social media twist on the death game genre!

Yuma and Ayame are working on different teams to beat the I.D. Scorers’ Club game, and getting Real Account’s ofﬁce lady pawns to give up their names will take more social cunning than they expected. After the game’s bloody conclusion, another twisted creation awaits the winners: Real Account Go. Players must catch all of Marble’s video game-inspired monsters before time runs out, and 0% phone battery means death. Despite these threats, an old friend reunites with Yuma’s group, and there may even be a romance blooming—but can a good thing ever last in the Real Account world?
Okushou's acclaimed Real Account manga is the first series from the author to be translated into English. Okushou is currently working on a new series called The Girl in the Arcade.