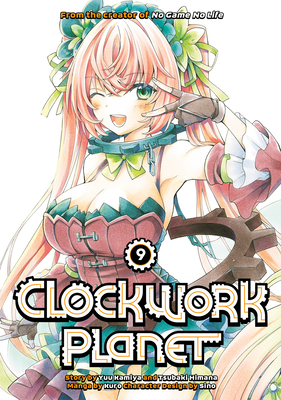 This is book number 9 in the Clockwork Planet series.

A TRADE OF FATE

Naoto and his crew continue their deep descent into the dark world of Shangri-La, where crime, betrayal, and peril run rampant. The two geniuses, Naoto and Marie, attract evil forces in the hellish underbelly of society, and their fates slowly become locked together like rusted cogs. Shangri-La runs on death, and its strongest leader wants Halter to execute a tricky tradeoff, but will the decision Halter makes be the right one...? And when an unfamiliar face from the Initial-Y series appears, RyuZU might be in trouble!
Yuu Kamiya is a Brazilian-Japanese creator who started his career as a manga artist but turned to novel writing for health reasons. His No Game No Life series was one of the top-selling Japanese book franchises of 2014, and was adapted into a manga and anime. Clockwork Planet is his second major franchise to be translated into English.