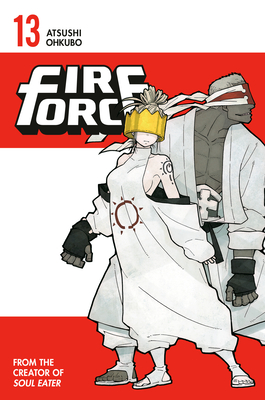 This is book number 13 in the Fire Force series.

It's a battle to get the Fifth Pillar, but Company 8 has more than just the Evangelist's goons to deal with--a massive Infernal outbreak has set the entire city on fire! While the Fire Force works tirelessly to extinguish the blaze, Shinra fights an uphill battle against the powerful Charon. Will he be able to save Inca? Or will the Fire Force drown in a sea of flames?
Atsushi Ohkubo made his manga debut in 2001. In 2004, he created Soul Eater, which would run for seven years and become an international bestseller, later adapted into a hit anime broadcast on Cartoon Network. Fire Force is his first manga for Kodansha Comics.