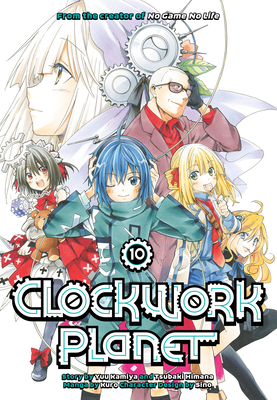 This is book number 10 in the Clockwork Planet series.

Naoto, Marie, and the crew are tangled up in the politics of the ruthless, violent city of Shangri-La. But when Second Upsilon gets down to business, they realize what's more important than turf wars and governments: Doing whatever they want! The two young geniuses and their mechanical comrades stir up wild mayhem and just might save the whole world while they're at it, too!

FINAL VOLUME!
Yuu Kamiya is a Brazilian-Japanese creator who started his career as a manga artist but turned to novel writing for health reasons. His No Game No Life series was one of the top-selling Japanese book franchises of 2014, and was adapted into a manga and anime. Clockwork Planet is his second major franchise to be translated into English.