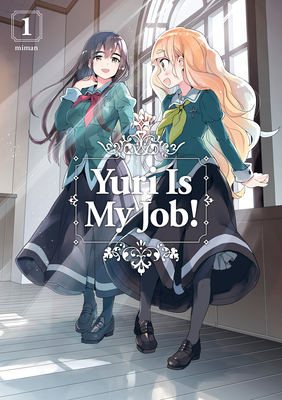 This is book number 1 in the Yuri Is My Job! series.

Hime is a picture-perfect high school princess--she's admired by all and never trips up! So when she accidentally injures a café manager named Mai, she's willing to cover some shifts to keep her façade intact. To Hime's surprise, the café is themed after a private school where the all-female staff always puts on their best act for their loyal customers. However, under the guidance of the most graceful girl there, she can't help but blush and blunder! Beneath all the frills and laughter, Hime feels tension brewing as she finds out more about her new job and her budding feelings...
Miman had already been a popular contributor to yuri manga anthologies when her first series, Yuri Is My Job!, launched in 2016. It is also her first series to be translated into English.