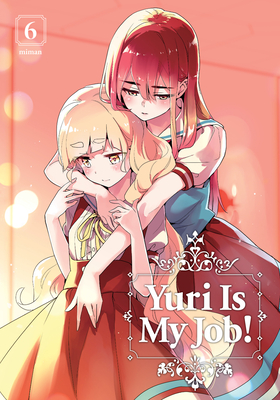 This is book number 6 in the Yuri Is My Job! series.

After turning down Hime's early birthday gift, Mitsuki realizes she may have rejected her friend's good intentions along with it...and this wouldn't be the first time. On the big day, however, Mitsuki can't make it to Liebe Academy to celebrate, bedridden from a cold. So when Hime shows up at her door to check on her, Mitsuki makes a bold move to set the record straight. Taken aback by Mitsuki's earnestness, Hime finds it difficult to return to work. With the manager's arm healed, the salon finally has a full staff like before--so is there any reason for Hime to stay?
Miman had already been a popular contributor to yuri manga anthologies when her first series, Yuri Is My Job!, launched in 2016. It is also her first series to be translated into English.