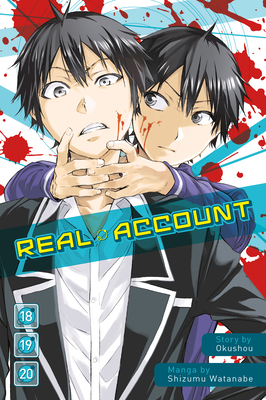 This is book number 18 in the Real Account series.

"If you reach zero followers, you die!"

“Social Justice Hunters 24/7” concludes with a decisive battle between Yuma and Zui, but this is soon followed by a fateful reunion between Yuma and Ataru...and why is Ataru trying so desperately to kill his own brother? In the next game, “Anonymous Classroom,” the players must root out the hidden traitor amongst them, but with each new attempt ending in failure, another player is sacrificed. There is evil lurking amongst them, and Yuma is beginning to wonder if it might be him!
Okushou's acclaimed Real Account manga is the first series from the author to be translated into English. Okushou is currently working on a new series called The Girl in the Arcade.