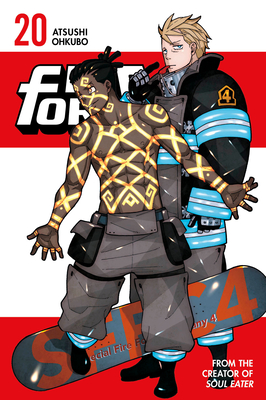 This is book number 20 in the Fire Force series.

BEYOND THE LIMIT
Shinra, Arthur, and Tamaki have returned to Asakusa to get another massive power up from training with Captain Shinmon. While Tamaki must win a game against the foul-mouthed twins, Hikage and Hinata, Shinra and Arthur are pushed past the limits of their limits. Can they get the improved strength they seek, or will they die trying?

The city of Tokyo is in the grip of a reign of terror! Possessed by demons, people have begun to burst into flame, leading to the establishment of a special firefighting team: the Fire Force, ready to roll on a moment's notice to fight spontaneous combustion anywhere it might break out. But the team is about to get a very unique addition: Shinra, a boy who possesses the unique power to run at the speed of a rocket, leaving behind the famous "devil's footprints" (and destroying his shoes in the process). Can the Fire Force discover the source of this strange phenomenon and put a stop to it? Or will the city burn to ashes first?
Atsushi Ohkubo made his manga debut in 2001. In 2004, he created Soul Eater, which would run for seven years and become an international bestseller, later adapted into a hit anime broadcast on Cartoon Network. Fire Force is his first manga for Kodansha Comics.