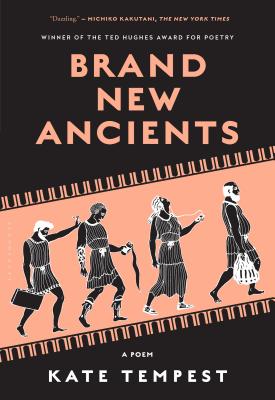 With this dazzling modern myth in verse, Kae Tempest became the youngest winner of the prestigious Ted Hughes Award for New Work in Poetry.

Kae Tempest's words in Brand New Ancients are written to be read aloud; the book combines poem, rap, and humanist sermon, by turns tender and fierce. Set in Southeast London, Brand New Ancients finds the mythic in the mundane. It is the story of two half-brothers, Thomas and Clive, unknown to each other -- Thomas the result of an affair between his mother and Clive's father. Tempest, with wide-ranging empathy, takes us inside the passionless marriage of Jane and Kevin -- the man who suspects Thomas is not his son, but loves him just the same -- and the neighboring home of Mary and Brian, where betrayal has not been so placidly accepted. The sons of these two households -- quiet, creative Thomas and angry, destructive Clive -- will cross paths in adolescence, their fates converging with mortal fury.

These characters' loves, their infidelities, their disappointments and their small comforts -- these, Tempest argues, are timeless. Our lives and our choices are no less important than those of history and myth. Awarded the Ted Hughes Award for New Work in Poetry, Brand New Ancients insists on our importance as individuals -- and asserts Kae Tempest's importance as a talent impossible to ignore.

Kate Tempest was born in London in 1985. Her work includes the plays Wasted, Glasshouse, and Hopelessly Devoted; the poetry collections Everything Speaks in its Own Way and Hold Your Own; the albums Everybody Down, Balance, and Let Them Eat Chaos; the long poems Brand New Ancients and Let Them Eat Chaos; and her debut novel, The Bricks that Built the Houses.

“Breathe[s] new life into old classic forms; a long poem about us and the gods that’s all high-kicking verve and long-range understanding. I loved its vision, powerful and merciful.” - Ali Smith, The Observer, Best Books of the Year, on BNA

“Feels as if we are . . . gathered around a hearth, hearing the age-old stories that help us make sense of our lives. . . The ordinary is lifted into the extraordinary.” - The Guardian on BNA

“A torrent of poetry so brilliant that the words often seem to glow and smoke with intensity . . . [Tempest] writes with brilliance, but above all with overwhelming love.” - The Scotsman on BNA

“The most exciting contribution to poetry this year . . . Tempest has created an ambitious, unforgettable mythology and made us look at the world afresh.” - Judges' citation for Ted Hughes Award for BNA