Crisis Point: Why We Must – and How We Can – Overcome Our Broken Politics in Washington and Across America (Hardcover) 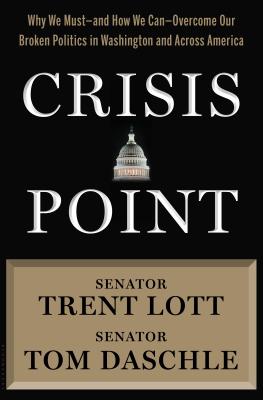 Tom Daschle and Trent Lott are two of the most prominent senators of recent time. Both served in their respective parties' leadership positions from the 1990s into the current century, and they have almost sixty years of service between them. Their congressional tenure saw the Reagan tax cuts, a deadlocked Senate, the Clinton impeachment, 9/11, and the Iraq War. Despite the tumultuous times, and despite their very real ideological differences, they have always maintained a positive working relationship, one almost unthinkable in today's hyper-partisan climate.

In their book, Daschle and Lott come together from opposite sides of the aisle to sound an alarm on the current polarization that has made governing all but impossible; never before has the people's faith in government been so dismally low. The senators itemize damaging forces--the permanent campaign, the unprecedented money, the 24/7 news cycle--and offer practical recommendations, pointing the way forward. Most crucially, they recall the American people, especially our leaders, to the principles enshrined in the Constitution, and to the necessity of debate but also the imperative of compromise--which will take leadership, vision, and courage to bring back.

Illustrated with personal stories from their own eminent careers and events cited from deeper in American history, Crisis Point is an invaluable work that comes at a critical juncture. It is a work of conscience, as well as duty, written with passion and eloquence by two men who have dedicated their lives to public service and share the conviction that all is far from lost.

Tom Daschle is a former U.S. Senator and Senate majority leader from South Dakota. He is currently a special policy advisor at the law firm Alston & Bird LLP, a visiting professor at the Georgetown Public Policy Institute, and a Distinguished Senior Fellow at the Center for American Progress.

"An important contribution to an ongoing debate." —Kirkus Reviews

"Have you lost hope that we can ever lick the hyper-partisanship that has made our politics unbearable and our nation less governable? Pull yourself back from the brink and read this practical, uplifting book by two distinguished former Senate Majority Leaders, one a conservative Republican and the other a liberal Democrat. They don’t agree on all the issues and solutions, and the rest of us won’t either, but they show how rational people of good will can come together to change today’s toxic environment. Trent Lott and Tom Daschle urge public officials and citizens alike to do better. In our own interests, we had better start meeting their challenge." —Larry J. Sabato, UVA Center for Politics director and author of THE KENNEDY HALF-CENTURY

"Trent Lott and Tom Daschle were remarkable Congressional leaders who revered the Constitution and got things done during difficult times. This timely book extends their public service by illustrating how political parties can achieve the greater good—how Congress can again work successfully and regain public confidence and support." —Former Senator Richard Lugar

"There was a time when the U.S. Senate dealt with big issues in a serious way. Trent Lott and Tom Daschle have written a lively description of life and leadership in the U.S. Senate when ‘compromise’ wasn’t a four-letter word and when America’s business got done!" —Former Senator Byron Dorgan

"In negotiating the Bipartisan Balanced Budget Agreement, these two remarkable leaders put aside their partisanship and simply did what they thought was right for the country. Washington needs a lot more leadership like this today. In this book these two former Senate Majority Leaders tell how this can be repeated and why it must." —Erskine Bowles. White House Chief of Staff under President Clinton