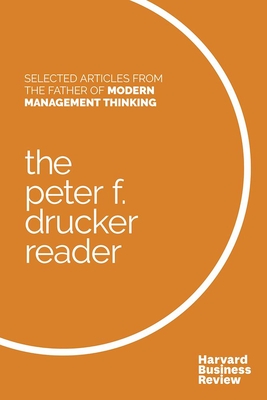 The best of Peter F. Drucker's articles on management, all in one place.

That "management" exists as a concept, a practice, and a profession is largely due to the thinking of Peter F. Drucker. For nearly half a century, he inspired and educated managers--and powerfully shaped the nature of business--with his iconic articles in Harvard Business Review.

Through the lens of Drucker's broad vision, this volume presents an opportunity to trace the great shifts in organizations in the late twentieth and early twenty-first centuries--from manufacturing to knowledge work, from career-length employee tenures to short-term contract relationships, from command-and-control structures to flatter organizations that call for new leadership techniques.

These articles also offer a firm and practical grasp of the role of the manager and the executive today--their responsibilities, their relationships, their decisions, and detailed processes that can make their work more effective.

A celebrated thinker at his best, in this volume Drucker paints a clear and comprehensive picture of management thinking and practice--both as it is and as it will be.

This collection of articles includes: "What Makes an Effective Executive," "The Theory of the Business," "Managing for Business Effectiveness," "The Effective Decision," "How to Make People Decisions," "They're Not Employees, They're People," "The New Productivity Challenge," "What Business Can Learn from Nonprofits," "The New Society of Organizations," and "Managing Oneself."

Peter F. Drucker (1909-2005) is one of the best-known and most widely influential thinkers on the subject of management theory and practice, and his writings contributed to the philosophical and practical foundations of the modern corporation.Often described as the father of modern management theory, Drucker explored how people are organized across the business, government, and nonprofit sectors of society; he predicted many of the major business developments of the late twentieth century, including privatization and decentralization, the rise of Japan to economic world power, the critical importance of marketing, and the emergence of the information society with its implicit necessity of lifelong learning. In 1959, Drucker coined the term knowledge worker and in his later life considered knowledge-worker productivity to be the next frontier of management.Peter Drucker died on November 11, 2005, in Claremont, California. He had four children and six grandchildren.You can find more about Peter F. Drucker at cgu.edu/center/the-drucker-institute.