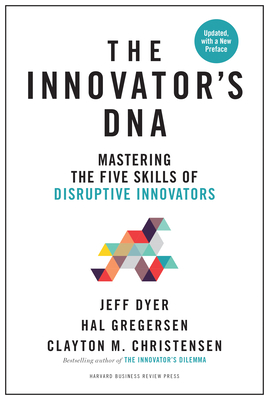 A new classic, recommended by leaders and media around the world

In this bestselling book, authors Jeff Dyer (Innovation Capital and The Innovator's Method), Hal Gregersen (Questions Are the Answer), and Clayton M. Christensen (The Innovator's Dilemma, The Innovator's Solution, and How Will You Measure Your Life?) build on what we know about disruptive innovation to show how individuals can develop the skills necessary to move progressively from idea to impact.

By identifying the winning behaviors of the world's best innovators--from leaders at Amazon and Apple to those at Google, Tesla, and Salesforce--Dyer, Gregersen, and Christensen outline five discovery skills that distinguish innovative entrepreneurs and executives from ordinary managers: associating, questioning, observing, networking, and experimenting. Through real-world stories, the authors show you how to evaluate and develop your own innovator's DNA code, including advice for how you can use the five skills to generate ideas, collaborate with colleagues to implement them, and sharpen your organization's competitive edge by building innovation skills into its culture. This innovation advantage will translate into a premium in your company's stock price--an innovation premium--which is possible only by building the code for innovation right into your organization's people, processes, and guiding philosophies. This book shows you how.

Now updated with a new preface and fresh examples, The Innovator's DNA is more than ever the essential resource for individuals, managers, and teams who want to strengthen their innovative prowess.

Jeff Dyer is the Horace Beesley Distinguished Professor of Strategy at Brigham Young University's Marriott School and an adjunct professor at the Wharton School, University of Pennsylvania. Dyer is a coauthor of Innovation Capital (with Nathan Furr and Curtis Lefrandt) and The Innovator's Method (with Nathan Furr). He is widely published in Harvard Business Review, Forbes, and other business journals. He is a cofounder of Innovator's DNA, a consultancy that enables organizations to build a culture of innovation.Hal Gregersen is Executive Director of the MIT Leadership Center and a senior lecturer in leadership and innovation at the MIT Sloan School of Management. He has been recognized by Thinkers50 as one of the world's most innovative minds. He has authored or coauthored ten books, including his recent bestseller Questions Are the Answer.Clayton M. Christensen is the Kim B. Clark Professor of Business Administration at Harvard Business School. He is best known for his theory of disruptive innovation--first introduced in his bestselling book The Innovator's Dilemma--which has been called the most influential business idea of the early twenty-first century.Author social media/website info: Jeff Dyer: innovatorsdna.com, @Jeffrey_Dyer, innosight.com, @InnovatorsDNA, @innovators_dnaHal Gregersen: halgregersen.com, @HalGregersenClayton M. Christensen: claytonchristensen.com