The Inside Counsel Revolution: Resolving the Partner-Guardian Tension (Hardcover) 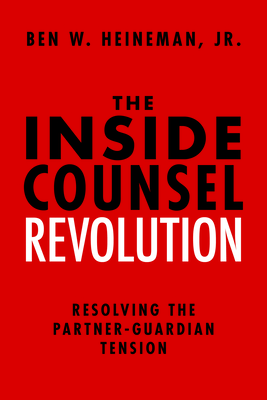 The Inside Counsel Revolution: Resolving the Partner-Guardian Tension (Hardcover)


This title is likely unavailable. Email or call for price and availability.
In the past 25 years, there has been a revolution in the legal profession. General Counsel and other inside lawyers have risen in quality, responsibility, power and status. Once second class citizens in corporations and the legal profession, they have become core members of top corporate management, equaling in importance the Chief Financial Officer and the finance function. Benjamin W. Heineman, Jr. has led that revolution in his nearly 20 years as the top lawyer at GE. In this analytic and prescriptive book, he describes the essence of that transformation and the modern role of inside counsel: the key functions, relationships, issues, problems and dilemmas, and argues for the role of inside counsel as lawyer-statesman, motivated not just by the desire for income but by broader values of integrity and corporate citizenship.
Benjamin W. Heineman Jr. is GE's former senior vice-president for law and public affairs and is currently a senior fellow at Harvard Law School and at Harvard's Kennedy School of Government.