They Say Sarah: A Novel (Paperback) 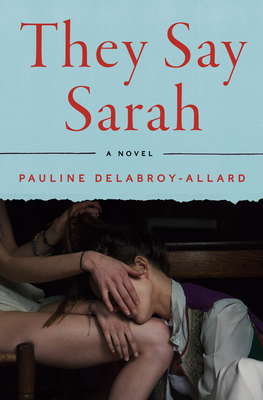 By Pauline Delabroy-Allard, Adriana Hunter (Translated by)
$15.99
On Our Shelves as of 9am Today

A literary sensation in France, this poetic, thrilling debut charts the all-consuming passion between two women and the ruin it leaves in its wake.

A thirty-something teacher drifts through her life in Paris, raising a daughter on her own, lonely in spite of a new boyfriend. And then one night at a friend's tepid New Year's Eve party, Sarah enters the scene like a tornado—a talented young violinist, she is loud, vivacious, appealingly unkempt in a world where everyone seems preoccupied with being “just so.” Thus begins an intense relationship, tender and violent, that will upend both women's lives.

In gorgeous, evocative prose, Pauline Delabroy-Allard perfectly captures the pull of a desire so strong that it blinds us to everything else.

Pauline Delabroy-Allard was born in 1988. They Say Sarah is her first novel.

Adriana Hunter studied French and Drama at the University of London. She has translated more than eighty books, including Véronique Olmi’s Bakhita and Hervé Le Tellier’s Eléctrico W, winner of the French-American Foundation’s 2013 Translation Prize in Fiction. She lives in Kent, England.

“Titillating with its frank descriptions of sex…and captivating with its investigation of the suffering involved in passion. It’s a brief, intense read…alluring and disturbing.” —The Guardian

“An intense affair between two women is brought to life…in [Delabroy-Allard’s] enjoyable debut…a book that reads at times—this is high praise—like a new iteration of Jeanette Winterson’s Written on the Body (absorbing passion, illness, separation) and that moves impressively from the chaos and noise of love, to silence and solitude, like a spun coin settling.” —The Observer

“A whirlwind jaunt through two women’s fast-moving love affair…the action unspools quickly through a blitz of sex, travel, and emotional turmoil, cascading to a point of no return…thrilling.” —Publishers Weekly

“Already a huge hit in France, where it was nominated for the prestigious Prix Goncourt before it was even published, Delabroy-Allard’s sulphurous autobiographical novel centers on a young, newly-single mother in Paris who embarks on a tempestuous relationship with a professional violinist.” —OprahMag.com, LGBTQ Books That Are Changing the Literary Landscape in 2020

“A gasping, sensory-driven symphony of love and despair.” —Booklist

“There are shades of Duras, Nabokov, and Barthes in the intensely living heart of this magnificent novel.” —L'Express