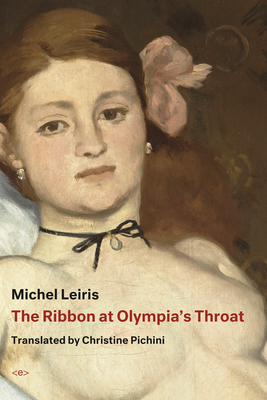 
This title is likely unavailable. Email or call for price and availability.
Short fragments and essays that explore how a seemingly irrelevant aesthetic detail may cause the eruption of sublimity within the mundane.

That the nude painted by Manet (in a painting so conceptually new that it created a scandal in its day) achieves so much truth through such a minor detail, that ribbon that modernizes Olympia and, even more than a beauty mark or a patch of freckles would, renders her more precise and more immediately visible, making her a woman with ties to a particular milieu and era: that is what lends itself to reflection, if not divagation!
—from The Ribbon at Olympia's Throat

In The Ribbon at Olympia's Throat, Michel Leiris investigates what Lydia Davis has called the “expressive power of fetishism”: how a seemingly irrelevant aesthetic detail may cause the eruption of sublimity within the mundane.

Written in 1981, toward the end of Leiris's life, The Ribbon at Olympia's Throat serves as a coda to his autobiographical masterwork, The Rules of the Game, taking the form of both shorter fragments (poems, memory scraps, notes) that are as formally disarming as the fetishistic experiences they describe, and longer essays, more exhaustive critical meditations on writing, apprehension, and the nature of the modern. Rooted in remembrance, devoted to the kaleidoscopic intricacies of wordplay, Leiris draws from his own aesthetic experiences as writer and spectator to explore the fetish that “exposes and disarms the sinister passage of time,” conferring “an undeniable realness upon the whole by essentially causing it to crystallize in a reality it would never have possessed if that sturdy fragment hadn't acted as bait.”

Michel Leiris (1901–1990) was a French surrealist writer and ethnographer. Part of the Surrealist group in Paris, Leiris became a key member of the College of Sociology with Georges Bataille and head of research in ethnography at the CNRS.
"Less a coda to his masterwork than its continuation, The Ribbon at Olympia’s Throat is perhaps the best introduction to Leiris, his interests, and the curve of his rhythms.” —Sasha Frere-Jacobs, The New Yorker