The Provider Cookbook: Fish and Game Recipes for Eating Wild and Living Off the Land (Hardcover) 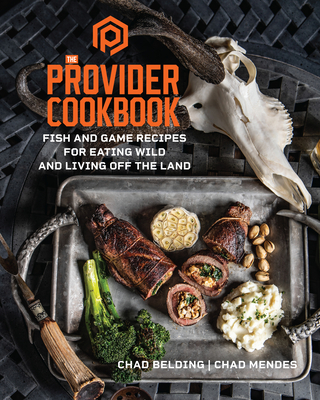 The Provider Cookbook: Fish and Game Recipes for Eating Wild and Living Off the Land (Hardcover)

Innovative wild game, fish, and fowl recipes for modern-day Providers: those who hunt, garden, cook, and live off the land

In our modern ways of cooking and eating, we’ve gotten out of touch with Mother Nature. Those who hunt, fish, and enjoy wild game know that we should always respect and cherish our food and where it comes from.

For hunter/chef Chad Belding and MMA star Chad Mendes, hunting and ethical farming are crucial ways to reinforce our connection to nature. In The Provider Cookbook, Belding and Mendes share recipes and stories to celebrate this way of life and keep it alive for generations to come. Here you’ll find everything from comfort-food classics to more refined cuisine, including:

They also share tips for properly storing food, plus recipes for domestic meats and their favorite vegetable sides and sauces. Accompanied by gorgeous food and landscape photography, the recipes and stories in The Provider Cookbook will take you on a journey from field and farm to table.
Chad Belding, born in Reno, Nevada, is a lifelong sportsman and outdoors enthusiast whose love of the lifestyle was instilled at a very young age by his father, who ensured that both Chad and his brothers were encouraged to evolve an appreciation of the outdoors at every turn. Chad’s passion eventually led him to predator and waterfowl hunting, and he later became involved in competitive duck and goose calling while attending college at The University of Nevada Reno. Following his graduation with a Bachelor’s degree, he put his background in business to good use, co-owning and operating several businesses across Nevada, Colorado, and Washington.

In 2008, Chad founded Banded, a video production and merchandising company that specializes in hunting gear and accessories. That same year, he became a part of The Fowl Life, which is still airing on The Outdoor Channel. Chad started his podcast This Life Ain’t For Everybody in 2018, where he covers a wide assortment of themes and topics related to the outdoors. Always looking forward, Chad is also closely involved with The Provider, a new brand that will provide live workshops on dog training, hunting / shooting, and preparing your bounty. When he’s not hard at work or spending time with his family, Chad loves music, baseball, and boating, and is also a philanthropist working with several charities including Ronald McDonald House, Freedom Hunters, St. Jude’s, and Special Ops Excursions, amongst others.

Chad Mendes was born and raised in central California, where wrestling, hunting and fishing were a huge part of his life growing up. He was recruited to wrestle at Cal Poly SLO, where his small town palette was introduced to a whole new world of cuisines. There he became a two-time NCAA D-1 All-American and runner up during his senior year. After graduating, he moved up to Sacramento and began his UFC career. Within his 10 years of fighting, he fought for the UFC world title three times, competing against opponents such as Conor Mcgregor and Jose Aldo. With hunting being such a huge part of his life still, he teamed up with Chad Belding of The Fowl Life to bring readers The Provider Cookbook, featuring their favorite recipes.