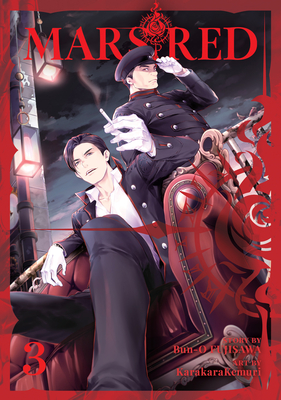 This is book number 3 in the MARS RED series.

The vampire soldiers in Special Unit 16 have faced down many monsters, but now they are up against the mysterious Defrott, a powerful vamp who looks like a young boy. When they face off against him, Kurusu and his brothers-in-arms discover that there might be an even bigger threat behind the scenes, one that makes them question their very existence! All will be revealed in the grand finale of Mars Red!

Bunou Fujisawa is a Japanese author who wrote the original stage play that MARS RED is based on, as well as the screenplay for Deemon The Movie.

Kemuri Karakara is a prolific Japanese manga artist and writer who is well known for exciting, action-packed historical manga, such as Laughing Under the Clouds, Rengoku ni Warau, and MARS RED.