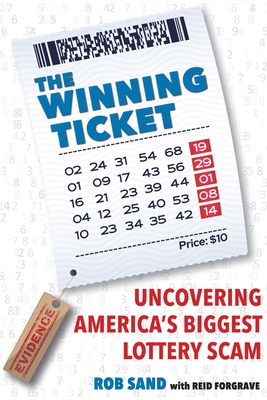 
Available in Warehouse. Wait for Email Confirmation for ETA
The Winning Ticket is an inside look at one of the most complicated yet seat-of-your-pants financial investigations and prosecutions in recent history. Rob Sand, the youngest attorney in his office, was assigned a new case by his boss, who was days away from retirement. Inside the thin accordion binder Sand received was meager evidence that had been gathered over the course of two years by Iowa authorities regarding a suspicious lottery ticket. No one expected the case to go anywhere. No dead body, no shots fired, and no money paid out. Why should they care? There was no certainty that a crime had even been committed. But a mysterious Belizean trust had attempted to claim the $16 million ticket, then decided to forgo the money and maintain anonymity when the State of Iowa demanded to know who had purchased the ticket. Who values anonymity over that much money?

Both a story of small-town America and a true-crime saga about the largest lottery-rigging scheme in American history, The Winning Ticket follows the investigation all the way down the rabbit hole to uncover how Eddie Tipton was able to cheat the system to win jackpots over $16 million and go more than a decade without being caught—until Sand inherited the case.

Just as remarkable as the crime are the real-life characters met along the way: an honest fireworks salesman, a hoodwinked FBI agent, a crooked Texas lawman, a shady attorney representing a Belizean trust, and, yes, Bigfoot hunters. While some of the characters are nearly unbelievable, the everyday themes of integrity and hard work resonate throughout the saga. As the case builds toward a reckoning, The Winning Ticket demonstrates how a new day has dawned in prosecuting complex technological crimes.

Rob Sand was elected as Iowa’s state auditor in 2018. A native of Decorah, Iowa, he previously served seven years as an Iowa assistant attorney general. Reid Forgrave is a newspaper and magazine writer who currently writes for the Star Tribune in Minneapolis. He is the author of Love, Zac: Small-Town Football and the Life and Death of an American Boy.
"The Winning Ticket, Sand's firsthand account of exposing the swindle, reads like a good mystery and features greed, workplace anger, crooked cops, dishonest lawyers, and even an appearance by the American Bigfoot Society. As a bonus, the book provides a thoughtful examination of the investigatory and trial tactics surrounding white-collar crimes."—Paul D. Pearlstein, Washington Independent Review of Books

“If you bet that we cannot trust people in politics, The Winning Ticket will call your bluff. This true-crime story is also an inspiring tale of good government and the dedicated people like Rob Sand who deliver accountability. I learned, as Sand’s former professor, that he had a terrific legal mind. Reading this book taught me that he’s also a gifted storyteller.”—Katie Porter, U.S. Congresswoman (D-CA)

“As a former prosecutor I know that you can’t try complex cases like the Hot Lotto fraud scandal without tenacity, an eye toward justice, and many late nights. Throughout the case Rob Sand never lost sight of his Iowa values or sworn duty to seek justice. His story is both a gripping true-crime tale and a love letter to the small towns that shape the fabric of our country.”—Amy Klobuchar, U.S. Senator (D-MN)

“In an upbeat personal chronicle Rob Sand describes with narrative anecdotes how a youthful Iowan matured, ever mindful of old-fashioned values. As the country has become increasingly divisive and partisan Sand has opted for an uplifting path of public service built on trust and decency. For a public worn out by political traumas he provides a story about governance as it should be. It makes the reader proud rather than cynical about our great republic.”—Jim Leach, former U.S. Congressman (R-IA)