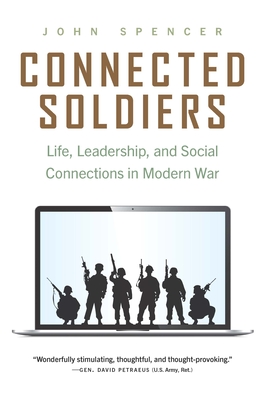 
Available in Warehouse. Wait for Email Confirmation for ETA
John Spencer was a new second lieutenant in 2003 when he parachuted into Iraq leading a platoon of infantry soldiers into battle. During that combat tour he learned how important unit cohesion was to surviving a war, both physically and mentally. He observed that this cohesion developed as the soldiers experienced the horrors of combat as a group, spending their downtime together and processing their shared experiences.

When Spencer returned to Iraq five years later to take command of a troubled company, he found that his lessons on how to build unit cohesion were no longer as applicable. Rather than bonding and processing trauma as a group, soldiers now spent their downtime separately, on computers communicating with family back home. Spencer came to see the internet as a threat to unit cohesion, but when he returned home and his wife was deployed, the internet connected him and his children to his wife on a daily basis.

In Connected Soldiers Spencer delivers lessons learned about effective methods for building teams in a way that overcomes the distractions of home and the outside world, without reducing the benefits gained from connections to family.

John Spencer is the chair of Urban Warfare Studies with the Modern War Institute, United States Military Academy. He served twenty-five years in the U.S. Army as an infantry soldier and is a highly decorated combat veteran. Spencer is the host of the Urban Warfare Project podcast, in which he interviews fellow industry experts.
"The strength of this book is found in the stories Spencer shares about his experiences and his observations on connectivity and cohesion. Veterans of Iraq and Afghanistan will find his experiences relatable and a catalyst for reflecting on their own deployments. Spencer's observations on social media and unit cohesion reflect problems that many commanders face today in building effective teams."—Lt. Col. Joe Byerly, Association of the United States Army

“A wonderfully stimulating, thoughtful, and thought-provoking examination of how the increase in connectivity between those on the front lines and those on the home front affects the all-important bonds between our soldiers carrying out tough missions overseas.”—Gen. David Petraeus, U.S. Army (Ret.), former commander of the surge in Iraq, U.S. Central Command, and Coalition Forces in Afghanistan

“An original and invaluable book on modern war, as well as a frank and unflinchingly honest portrait of leadership and family life in the current military.”—Phil Klay, National Book Award–winning author of Redeployment and Missionaries

“John Spencer’s story is valuable for leaders in military organizations and beyond. Connected Soldiers provides unique insight into the experiences of a military family in which both parents served their nation, one another, and their fellow soldiers.”—Lt. Gen. H. R. McMaster, U.S. Army (Ret.), former national security advisor

“There are thinkers and doers and John Spencer is both. When this warrior-scholar has something to teach about conflict, we all need to listen.”—Max Brooks, New York Times best-selling author of World War Z and Devolution

“John Spencer is the real deal: a seasoned veteran who has experienced the intense group cohesion of battle firsthand. But his generation has also dealt with the incredibly disconnecting effect of the internet. His insights about how twenty-four-seven connection to home affects a platoon in combat is vital to any modern understanding of war.”—Sebastian Junger, New York Times best-selling author of War and Tribe: On Homecoming and Belonging

“A personal and truly compelling exploration of war, Connected Soldiers illuminates the humanity and inhumanity of conflict and the critical question of how constant electronic communication is changing the experience of combat for soldiers and their families.”—Gayle Tzemach Lemmon, New York Times best-selling author of Ashley’s War and The Daughters of Kobani

“Connected Soldiers is a sophisticated examination of how the bonds between soldiers can sustain a military unit through danger, tragedy, and uncertainty. Spencer provides a firsthand view of how those bonds can be nurtured through shared hardship—and also be imperiled by technology permitting deployed soldiers to remain connected to the home front. Connected Soldiers is a must-read resource for every aspiring army leader as well as any researcher exploring the impact of cohesion in combat.”—Leonard Wong, research professor of military strategy at the U.S. Army War College

“In his brilliantly thoughtful Connected Soldiers, John Spencer captures the entirely new and uniquely challenging impacts that the proliferation of information technology has on soldier morale and cohesion. For those who must understand how and why servicemembers do their jobs this book is not just interesting—it is critically important.”—Gen. Stanley McChrystal, U.S. Army (Ret.), former commander of U.S. and International Security Assistance Force in Afghanistan and the Joint Special Operations Command