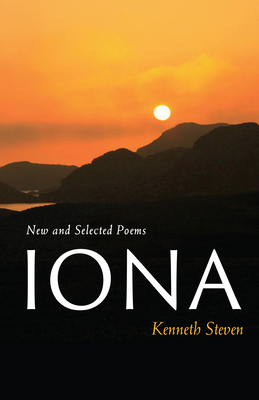 
This title is likely unavailable. Email or call for price and availability.
"Steven has an Irish monk’s attentiveness to the fragility, mystery, and hidden beauties of things." —Peter Leithart, First Things

The book is a gathering together of all of Kenneth Steven’s poems concerning the island of Iona through the years. These comprise poems that have been published in journals both at home and abroad, and broadcast on BBC Radio. A lengthy introduction tells the story of the forging of those first links with Iona, and those that have come through adult years. This is a book both for those who know and love the island, and for those who may yearn to visit but have not yet had the chance. It’s essentially a love song to a precious and an extraordinary place that has been the author’s spiritual home from earliest childhood days.
Kenneth Steven is widely published as a poet, novelist and children’s author; he’s also written and presented numerous programs for BBC Radio. Much of his work is deeply spiritual and rooted in wildscape. He was born and grew up in Scotland, and he visited the island of Iona in many summers with his parents from an early age. It’s this place that has come to feel more and more his spiritual home through the years. He and Kristina Hayward live on the Scottish west coast where they work together much of the time melding images and words. For several years they have led an annual Celtic Christian retreat on Iona, to which people have come from many corners of North America and Europe. Much of Kenneth’s work is also to be found on Kindle. www.kennethsteven.co.uk
Praise for Iona
“Kenneth Steven is a bard in the richest and fullest sense of the word. His poems are incantations, invocations of the Divine Presence in the wild places of the Highlands and in our hearts and souls. We do not read his words so much as find ourselves invited to inhabit them.” —Carl McColman, author of Eternal Heart

“A pulse of something rare, quiet, and holy beats in the heart of these poems—call it the seasons turning in his beloved Scotland, call it a lyrical voice addressing and blessing this poet’s beloved recognition of the gifts of this earth, which he gives back so generously to us. In “Stopping To See” he tells us “You are blown out,/have gone beyond all clocks and watches/ink a place where only being matters.” And, indeed, these poems touch and dwell in the sacredness of pure presence, which is a miraculous and even deeper gift that puts us in touch with eternity. Only by books like this is our humanity fully revealed and redeemed.” —Robert D. Vivian, author of Cold Snap As Yearning and The Least Cricket Of Evening and Professor of English, Alma College