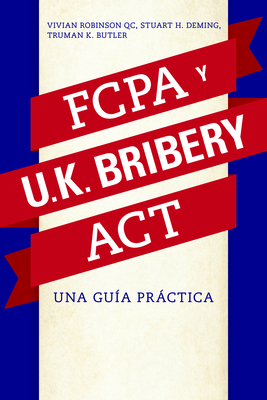 
This title is likely unavailable. Email or call for price and availability.
Acompa ada con orientaci n de apoyo, este libro contiene vi etas descriptivas que son f cil de seguir y lista de verificaci n de los varios factores que necesitan ser considerados y los pasos que necesitan ser tomados en implementar un efectivo programa de cumplimiento. Compacto y informativo, este libro es dise ado para ser distribuido a administraci n y personal de compa as, organizaciones, y otras entidades comprometidas internacionalmente. Adicional a tener excelente clave aspectos de la FCPA y la UK Bribery Act y como implementar un efectivo programa de cumplimiento, esta publicaci n contiene una muy buena referencia cuando preguntas surgen. This handy guide, specifically written for laypersons and, in particular, for business people as well as lawyers with limited experience provides explanations as to how each law is applied and guidance as to what companies and other organizations should be doing to comply with both the FCPA and the UK Bribery Act.
Vivian Robinson QC advises clients on the UK Bribery Act, as well as compliance on white-collar crime matters involving global fraud or corruption, including the Foreign Corrupt Practices Act ('FCPA'). As former first General Counsel to the UK's Serious Fraud Office ('SFO'), he led the development of the SFO's enforcement policy under the UK Bribery Act. He also served as the SFO's primary liaison with the business community to the UK Bribery Act's requirements at conferences in London, New York and other parts of the world. Mr. Robinson became a barrister in 1967 and practised at the English criminal bar for over forty years, acting for both prosecution and defence. He was appointed Queen's Counsel in 1986, was elected Head of QEB HollisWhiteman Chambers in 2006 and served as the Treasurer of the Inner Temple in 2009. He first sat as a part-time judge over thirty years ago and continues to do so. In 2009 he left the practising bar to take an appointment as first General Counsel at the SFO. In 2011 he was invited to join the US law firm McGuireWoods, where he practices in London as a member of the firm's Government, Regulatory and Criminal Investigation team. Since joining the firm, he has travelled extensively speaking on the UK Bribery Act and related issues. He is a graduate of Sidney Sussex College, Cambridge University, BA (Cantab.) Stuart H. Deming represents and advises clients on the FCPA, the UK Bribery Act, Canada's Corruption of Foreign Public Officials Act and other compliance issues associated with the conduct of international business. As a former federal prosecutor with the U.S. Securities and Exchange Commission and in various capacities with the U.S. Department of Justice, including as a special prosecutor, he led investigations of major companies, business executives and public officials. With over thirty years of experience in both the public and private sector, Mr. Deming has written extensively and spoken often in the US and abroad on the FCPA and related issues. He is the author of Oxford University Press' Anti-Bribery Laws in Common Law Jurisdictions; the ABA's Designing an Effective Anti-Bribery Compliance Program: A Practical Guide for Business; and the ABA's The Foreign Corrupt Practices Act and the New International Norms. For many years Mr. Deming co-chaired the ABA's National Institutes on the FCPA; he founded and co-chaired what is now the ABA's Anti-Corruption Committee; and he served on the Board of Editorial Advisors to the Foreign Corrupt Practices Act Reporter. Mr. Deming received his BA, MBA, and JD from the University of Michigan. He is also licensed asa Certified Public Accountant. Truman K. Butler is an international transactions attorney who has been actively involved with a range of compliance issues for major financial services firms. His practice includes providing advice on international compliance matters including the FCPA, UK Bribery Act, anti-money laundering laws and global sanctions. He most recently served as the Head of Global Risk & Compliance Assurance at a major biopharmaceuticalcorporation. Mr. Butler's professional experience spans private practice, financial services firms and life sciences. He has served as Senior Counsel with the Anti-Laundering, Global Sanctions and Anti-Corruption team of a global financial services firm, including as Assistant General Counsel responsible for international commercial transactions of a predecessor financial services firm. He previously served as corporate counsel at Lloyds TSB Bank International with responsibility for commercial transactions and corporate compliance in Latin America and the Caribbean. Licensed in England and Wales as a Barrister at Law of the Middle Temple, Mr. Butler is also licensed in the US in North Carolina and the Commonwealth of The Bahamas. An active member of the ABA's Section of International Law, he is a former Co-Chair of the International Anti-Money Laundering Committee and a former Steering Group Member of the International Anti-Corruption Committee. He received his LLB fromthe University of Wolverhampton, England and his LLM from the University of Georgia.