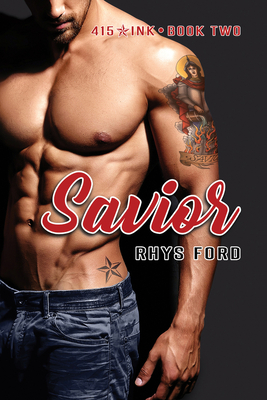 A savior lies in the heart of every good man, but sometimes only love can awaken the man inside the savior.

The world’s had it out for San Francisco firefighter Mace Crawford from the moment he was born. Rescued from a horrific home life and dragged through an uncaring foster system, he’s dedicated his life to saving people, including the men he calls his brothers. As second-in-command of their knitted-together clan, Mace guides his younger siblings, helps out at 415 Ink, the family tattoo shop, and most of all, makes sure the brothers don’t discover his darkest secrets.

It’s a lonely life with one big problem—he’s sworn off love, and Rob Claussen, one of 415 Ink’s tattoo artists, has gotten under his skin in the worst way possible.

Mace’s world is too tight, too controlled to let Rob into his life, much less his heart, but the brash Filipino inker is there every time Mace turns around. He can’t let Rob in without shaking the foundations of the life he’s built, but when an evil from his past resurfaces, Mace is forced to choose between protecting his lies and saving the man he’s too scared to love.

Rhys Ford is an award-winning author with several long-running LGBT+ mystery, thriller, paranormal, and urban fantasy series and was a 2016 LAMBDA finalist with her novel, Murder and Mayhem and a 2017 Gold and Silver Medal winner in the Florida Authors and Publishers President’s Book Awards for her novels Ink and Shadows and Hanging the Stars. She is published by Dreamspinner Press and DSP Publications. She’s also quite skeptical about bios without a dash of something personal. Rhys shares the house with two cats, Yoshi, a grumpy tuxedo and Tam, a diabetic black shorthair, as well as a ginger cairn terrorist named Gus. She is also responsible for the care and feeding of a 1979 Pontiac Firebird and enjoys murdering make-believe people. Rhys can be found at the following locations: Blog: www.rhysford.com Facebook: www.facebook.com/rhys.ford.author Twitter: @Rhys_Ford
"Simply stunning. I can with much fervor, recommend this book. It’s an emotion-provoking joy, and you don’t want to miss this amazing new series!" —Divine Magazine