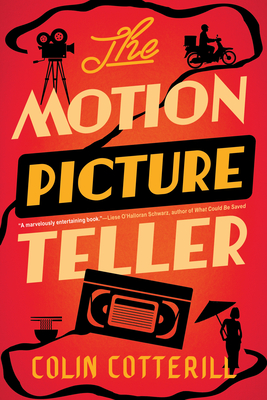 
Available in Warehouse. Wait for Email Confirmation for ETA
An enchanting new standalone novel from CWA Dagger winner Colin Cotterill, set in Bangkok: a mystery without a crime, where the line between fact and fiction blurs, and nothing is as simple as it appears

Thailand, 1996: Supot, a postman with the Royal Thai Mail service, hates his job. The only bright spot in his life is watching classic movies with his best friend, Ali, the owner of a video store. These cinephiles adore the charisma of the old Western stars, particularly the actresses, and bemoan the state of modern Thai cinema—until a mysterious cassette, entitled Bangkok 2010, arrives at Ali’s store.

Bangkok 2010 is a dystopian film set in a near-future Thailand—and Supot and Ali, immediately obsessed, agree it’s the most brilliant Thai movie they’ve ever seen. But nobody else has ever heard of the movie, the director, the actors, or any of the crew. Who would make a movie like this and not release it, and why?

Feeling a powerful calling to solve the mystery of Bangkok 2010, Supot journeys deep into the Thai countryside and discovers that powerful people are dead set on keeping the film buried.
Colin Cotterill is the author of fifteen books in the Dr. Siri Paiboun series. His fiction has won a Dilys Award and a CWA Dagger in the Library. He lives in Chumphon, Thailand, with his wife and a number of deranged dogs.
Praise for The Motion Picture Teller

"A marvelously entertaining book—it’s a buddy caper, spy thriller, gritty noir and even a dash of romcom all rolled into one delightfully fresh, highly enjoyable story with a charming cast of characters and a plot full of surprises. Don’t miss this!"
—Liese O’Halloran Schwarz, author of What Could Be Saved

“The Motion Picture Teller could be the strangest mystery you read this year, or even this decade. And you absolutely won't forget it.”
—Kingdom Books

“Cotterill has a double-edged sense of humor that can be gentle with humans yet skewer political ideology.”
—Kittling Books

“Quite entertaining.”
—The Complete Review

“Ample suspense . . . Cotterill explores with empathy and insight the power of movies to enrich and even guide our lives. An offbeat, uplifting thriller every movie lover will cherish.”
—Kirkus Reviews

“Heartfelt characters, vividly drawn setting, and subtle humor . . . Both established fans and those new to Cotterill will be charmed.”
—Publishers Weekly

“Cotterill has a gift for tempering bad stuff . . . with gently ironic humor and frequent doses of slightly kooky occultism. His books are thus a welcome balm for our own current baffling and chaotic political climate.”
—The Seattle Times