No Way Home: The Crisis of Homelessness and How to Fix It with Intelligence and Humanity (Hardcover) 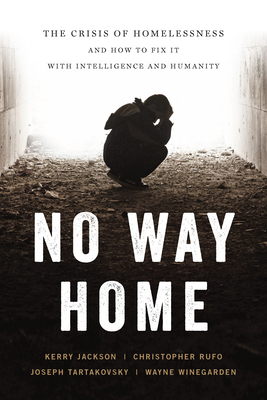 No Way Home: The Crisis of Homelessness and How to Fix It with Intelligence and Humanity (Hardcover)

In San Diego, not far from the gates of the fantasy world of Disneyland, tent cities lining the freeways remind us of an ugly reality. Homeless individuals are slowing rail traffic between Sacramento and the Bay Area and swarming subway trains in Los Angeles in search of a place to sleep when they're not languishing on Skid Row. Drug use among the homeless is plaguing communities, with discarded needles threatening children playing at public parks. And every day across California, thousands of homeless youth who lack safe and stable housing struggle to stay in school, to perform well academically, and to form meaningful connections with their teachers and peers.

Since the 1980s, countless research studies have been published on the topic of homelessness in America. Too often, however, social science research on homelessness is narrow in scope, mired in politics, and reliant on questionable assumptions about the root causes of the problem. The severity of the homeless crises afflicting cities requires innovative solutions backed by credible data and objective research. This book examines the causes of homelessness with a focus on unaffordable housing, poverty, mental illness, substance addiction, and legal reform. It examines the state and local policy environment to determine ways in which housing policy, social service programs, and employment opportunities interact to exacerbate, perpetuate, or reduce homelessness. The book also evaluates different strategies being used at the state, county, and local levels to prevent or reduce homelessness. Finally, the authors provide a mix of long-term policy solutions based on their findings that have the greatest potential to reduce homelessness.
Kerry Jackson, an independent journalist and opinion writer, is a leading commentator on California's homeless crisis. A fellow with the Center for California Reform at the Pacific Research Institute (PRI), Kerry writes weekly on statewide issues and occasional books and policy papers. Christopher F. Rufo is an adjunct fellow at PRI, a filmmaker, writer, and policy researcher. Director of the Discovery Institute's Center on Wealth and Poverty and a contributing editor at City Journal, Christopher graduated from Georgetown University and was a Claremont Institute Lincoln fellow. Joseph Tartakovsky is the former deputy solicitor general of Nevada, an attorney specializing in constitutional and appellate law, and author of The Lives of the Constitution. He is a PRI fellow in legal studies and has published in the New York Times, Wall Street Journal, and Los Angeles Times. Wayne Winegarden, PhD, is a senior fellow in business and economics at PRI and director of PRI's Center for Medical Economics and Innovation. Also the principal of an economic advisory firm, he has published in the Wall Street Journal, Chicago Tribune, Investor's Business Daily, Forbes.com, and USA Today.