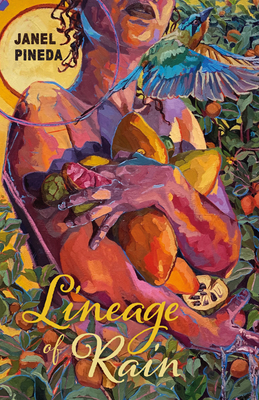 In this spellbinding debut, Los Angeles-born poet Janel Pineda sings of communal love and the diaspora and dreams for a liberated future. Lineage of Rain traces histories of Salvadoran migration and the US-sponsored civil war to reimagine trauma as a site for transformation and healing. With a scholar's caliber, Pineda archives family memory, crafting a collection that centers intergenerational narratives through poems filled with a yearning to crystallize a new world--one unmarked by patriarchal violence. At their heart, many of these poems are an homage to women: love letters to mothers, sisters, and daughters.

Lineage of Rain moves from los campos de El Salvador to the firework-laden streets of South Gate to the riverbanks of England. Pineda's masterful stroke weaves together these seemingly disparate worlds, illustrating the complicated reality of living as a first-generation student. As the speaker navigates elitism and the violence of the English language, she lays bare their ties to power. And yet, these poems rebel through revel, asking: how do we hold each other tenderly in a world replete with pain and many forms of violence? With dreams made possible through collective struggle, Pineda returns us to the seeds from which we bloom: family, history, and community. All the while, this collection never fails to capture often overlooked moments of joy--the mundane yet monumental--showing the reader that the world we dream is already ours. Through Lineage of Rain, Pineda emerges as a seminal contributor to the canon of Central American diasporic writing.

Janel Pineda (b. 1996 Los Angeles, CA) is a Salvadoran poet and educator. A first-generation college graduate, she earned a BA in English from Dickinson College, where she was a Posse Scholar. Pineda has performed her poetry internationally in both English and Spanish, and been published in LitHub, PANK, The BreakBeat Poets Vol. 4: LatiNext, and The Wandering Song: Central American Writing in the U.S., among others. She is a part of the editorial team that founded La Piscucha Magazine, a multilingual arts, literature, and culture magazine created by Salvadoran writers. Since her involvement with the 2018 Radical Roots Delegation, Pineda is also a member of the Committee in Solidarity with the People of El Salvador (CISPES). She is currently pursuing dual master's degrees in creative writing and gender studies at Goldsmiths, University of London, as a Marshall Scholar.