From Prison Cells to PhD: It is Never Too Late to Do Good (Paperback) 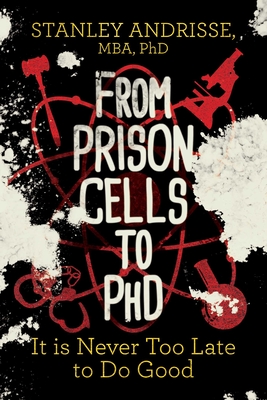 From Prison Cells to PhD: It is Never Too Late to Do Good (Paperback)


Available in Warehouse. Wait for Email Confirmation for ETA
A captivating story detailing how resilience and inner strength can be combined to overcome mountainous barriers to reach one’s full potential.

Growing up in Ferguson, Missouri, Stanley Andrisse began making poor decisions at a very young age. He started selling dope and was arrested for the first time at fourteen years old. By his early twenties, dope dealing had exponentially multiplied, and he found himself sitting in front of a judge facing twenty years to life on drug trafficking charges. The judge sentenced him to ten years in a maximum-security prison.

Prison was an experience like none other he’d ever encountered. While challenged with a strong desire for self-renewal, he faced an environment that was not conducive for transformative change. From poor institutional structure and policies to individual institutionalized thinking and behaviors, he battled on a daily basis to retain and maintain his humanity.

Upon release, and after several rejections, Stanley was accepted into a PhD program. He completed his PhD/MBA simultaneously and became an endocrinologist and impactful leader at Johns Hopkins Medicine, specializing in diabetes research.
Dr. Stanley Andrisse is an endocrinologist scientist and assistant professor at Howard University College of Medicine researching type 2 diabetes and insulin resistance. Dr. Andrisse holds a visiting professorship at Georgetown University Medical Center and held an adjunct professorship at Johns Hopkins Medicine after completing his postdoctoral training. Dr. Andrisse completed his PhD at Saint Louis University and his MBA and bachelor’s degree at Lindenwood University, where he played three years of Division II collegiate football.

Dr. Andrisse’s service commitments include: Executive Director and Founder of From Prison Cells to PhD, board member on the Formerly Incarcerated College Graduates Network (FICGN), past president of the Johns Hopkins Postdoctoral Association, founder of the Diversity Postdoctoral Alliance, member on several local and national committees aimed at community outreach, youth mentor, motivational speaker, and community activist.
“This is an incredibly powerful book about abolition, redemption, transformation, and the power of story in the fight for justice. Andrisse reminds readers of the remarkable range of talent, intellect, skill, and strength among people locked in cages in the United States. Every student, teacher, teacher educator, community member, parent, researcher, policymaker, police, and correctional officer, interested in more deeply understanding the human condition in prisons and committed to reimagining the carceral system, should read this book. An undeniable invitation to reimagine opportunity structures for all citizenry, this book touches the heart and the mind.”
— Rich Milner, Cornelius Vanderbilt Distinguished Professor of Education, Peabody College of Vanderbilt University

“A detailed, riveting look at the author’s epic journey: from early missteps, diving into darker pursuits, going through periods of incarceration and devaluation by society, and finally emerging into an impressive life that demonstrably contributes to society. Andrisse’s words are raw, realistic, and undeniably authentic. His story is a classic tale of wrong-to-reclamation, but it is so much more meaningful in this time of awakening in social justice reform. It captures the power of positive reinforcement in the echoes of his father’s words ‘It is never too late to do good.’ It also dispels the myth that groups of people can be dismissed as irredeemable. It is rare to find a book that describes the experience of incarceration without being either sensationalistic or trite. This book challenges stereotypes and allows the reader to travel alongside the author as he lives his experiences. It shows the power of education, hard work, mentorship, and of simply being supported by those who believe in the potential of others that may have different histories.”
— Sheila R. Meiman, Raritan Valley Community College, Director of Returning & Incarcerated Student Education (RISE), Adjunct Associate Professor of Mathematics