Letter to a Stranger: Essays to the Ones Who Haunt Us (Paperback) 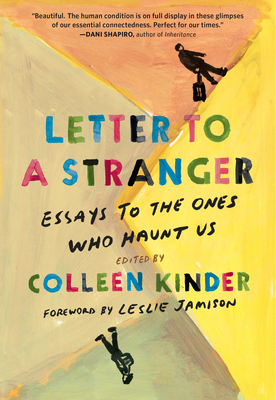 Letter to a Stranger: Essays to the Ones Who Haunt Us (Paperback)


Available for Pre-Order Now
“A celebration of the adventure that is other people.” —Ariel Levy, author of The Rules Do Not Apply

Lauren Groff, Elizabeth Kolbert, Pam Houston, Pico Iyer, T Kira Madden, Gregory Pardlo, Maggie Shipstead, and Peter Orner are among the 65 writers who grapple with this mystery: How can an ephemeral encounter leave an eternal mark?

When Colleen Kinder put out a call for authors to “write a letter to a stranger who haunts you,” she opened the floodgates. The responses—intimate and addictive, all in the form of letters, all written in the second person—began pouring in. These short, insightful essays by today’s best literary minds are organized around such themes as Grati­tude, Wonder, and Farewell, and guide us both across the globe and through the mysteries of human connection.

Bestselling author Leslie Jamison, who provides the foreword, reveals she has been haunted for years by a traveling magician she met in Nicaragua. Journalist Ted Conover writes his missive to a stranger he met on a New Yorker assignment in Rwanda. From the story of Vanessa Hua’s shoe shopper in China to the tale of Michelle Tea’s encounter in a Texas tattoo parlor, these pieces are replete with observations about how to live and what to seek, and how a stranger’s loaded glance, shared smile, or question posed can alter the course of our lives. Moving and unforgettable, Letter to a Stranger is an irresistible read for any literary traveler and the perfect gift for anyone who is haunted by a person they met once but will remember forever.
Colleen Kinder is an essayist and editor whose work has appeared in The New York Times Magazine, The New Republic, National Geographic Traveler, Salon.com, and The Best American Travel Writing. She has taught writing at Yale University, the Chautauqua Institution, and Semester at Sea. A Fulbright Scholar, Kinder received her MFA at the University of Iowa and is the author of Delaying the Real World and the cofounder of the online magazine Off Assignment.
“Letter to a Stranger is nothing less than a celebration of the adventure that is other people.”
—Ariel Levy, author of The Rules Do Not Apply

“The symphony of voices in Letter to a Stranger is at times rousing and exhilarating, at other times piercing and plaintive. The human condition is on full display, here in these fleeting glimpses of our essential connectedness. This beautiful book is a perfect one for our times. It reminds us that we are witnesses to one another’s joys and heartaches, even if we never exchange a word.”
—Dani Shapiro, New York Times bestselling author of Inheritance

“By turns, moving, hilarious, and scary, this collection of taut fiery essays is a sprint around the world—all keyhole portraits of unexpected brushes with that one character who flares with meaning.”
—Jack Hitt, author of Bunch of Amateurs