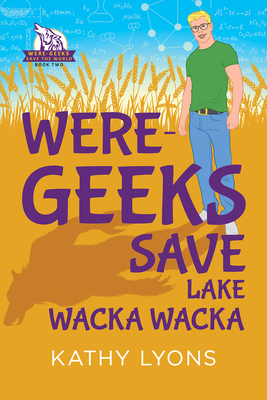 Were-Geeks Save the World: Book Two

Paramedic and firefighter Bruce Collier became a werewolf to protect his family—and hopefully make amends for the way he treated his younger brother. His bitterness nearly turned him into the monster he thought his brother was… until he met Mr. Happy.

Werewolf Laddin Holt—a.k.a. Mr. Happy—likes things organized as he makes them go boom. He’s Wulf, Inc.’s explosive expert and the only one calming the turmoil inside Bruce.

At least until they’re drawn into a conflict between two factions of fairies living around Lake Wacka Wacka. Bruce wants to take them out, Laddin has other ideas, and neither of them sees the real threat lurking behind the scenes—or how their love could be the answer to everybody’s problems.

Kathy Lyons is the wild, adventurous half of USA Today best selling author Jade Lee. A lover of all things fantastical, Kathy spent much of her childhood in Narnia, Middle Earth, Amber, and Earthsea, just to name a few. “There is nothing I adore more than to turn around on an ordinary day and experience something magical. It happens all the time in real life and in my books.” Her love of comedy came later as she began to see the ridiculousness in life.

Winner of several industry awards including the Prism—Best of the Best, the Romantic Times Reviewers’ Choice Award, and Fresh Fiction’s Steamiest Read, Kathy has published over sixty romance novels and is still going strong.

Her hobbies include racquetball, rollerblading, and TV/movie watching with her husband. She’s a big fan of TheBig Bang Theory (even though it’s over), and her favorite movie is The Avengers because she loves everything created by Joss Whedon. And she’d love to share all things geek with you in person at any of her many appearances. She’s usually found at the loudest table in the coffee shop or next to the dessert bar. To keep up with all things Lyons/Lee, sign up for her newsletter at www.KathyLyons.com. You’ll get early peeks, fresh news, chances to meet her in person, plus prizes and geeky gifts.