Student Resistance in the Age of Chaos Book 2, 2010-2021: Social Media, Womens Rights, and the Rise of Activism in a Time of Nationalism, Mass Migrations, and Climate Change (Paperback) 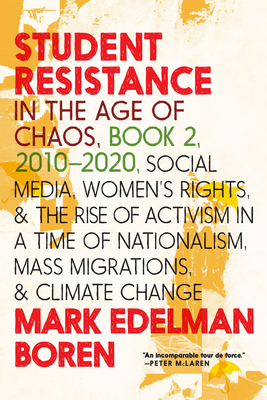 Student Resistance in the Age of Chaos Book 2, 2010-2021: Social Media, Womens Rights, and the Rise of Activism in a Time of Nationalism, Mass Migrations, and Climate Change (Paperback)


Available in Warehouse. Wait for Email Confirmation for ETA
The stirring history of global student activism during the second decade of the 21st century--up to and including the Black Lives Matter movement and the extraordinary events of 2020.

Student resistance in the second decade of the 21st century has increased in both quantity and quality, supercharged by social media, to the point where it has become the single most powerful force for change in the world today, embodying the hopes of hundreds of millions of citizens to finally address climate change, the condition of women and other major issues. Student resistance movements are the vanguard that can jumpstart wider social movements that put governments on notice at a time when corruption and stagnation plague democracies and authoritarian regimes alike. In Student Resistance in the Age of Chaos, Book 2, Mark Boren details the increasing technological sophistication of student movements, as the stakes continue to rise and the movements grow ever larger. With 1.5 billion students in the world, student activists today use technology to turn local movements into national and international ones. Armed with sophisticated communications and cell phone cameras to record police violence, linked to websites for broadcasting and encrypted apps for privacy, today's student activists have already done much to stop genocide and ensure government reform or regime change in scores of countries.
Student Resistance in the Age of Chaos, Book 2, is being published simultaneously with Student Resistance in the Age of Chaos, Book 1, 1999-2009: Globalization, Human Rights, Religion, War, and the Age of the Internet. Together, the two volumes present a complete and unprecedented history of today's student activism phenomenon. As Mark Boren writes, "The explosion of protests in the world has shown us that there are millions of people--many of them young and altruistic--who are willing to stand up to forces of oppression, to risk their bodies, their freedom, and their lives to make the future better than the past, and that is humbling, inspiring, and hopeful for the future."
Mark Edelman Boren's books include Student Resistance: A History of the Unruly Subject (Routledge, 2001) and Sugar Slavery, Christianity and the Making of Race (Caribbean Studies Press, 2015). He is also a visual artist whose artwork has been exhibited at Whitechapel Gallery in London, and Threadwaxing in New York. His passions include the fight for social justice, psychoanalysis, and romanticism. Currently Professor of English at the University of North Carolina, Wilmington, he has published on a wide array of writers, including Blake, Byron, Eliot, Faulkner, and Melville. He lives in the Wilmington, North Carolina area.
"Student Resistance in the Age of Chaos is a dangerous book for authoritarian and dictatorial leaders. This book can only inspire and guide a next generation of pro-democracy activists. This history-rich book, that tells unique stories and explains creative tactics of social movements, is an antidote to rising authoritarianism and populism in politics across the globe. An immensely important book in these times of political crisis! " —Inna Shevchenko, FEMEN

“Comprehensive and powerful, Mark Boren’s Student Resistance endows the reader with a sense of agency, and hope.” —Aric McBay

"Boren identifies globalization, human rights, religion, and war as major flashpoints, and offers accessible profiles of uprisings that took place in countries around the world. ... authoritative and exhaustive."—Booklist