Oh, to Be a Painter! (ekphrasis) (Paperback) 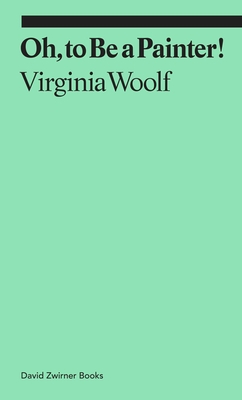 Oh, to Be a Painter! (ekphrasis) (Paperback)


This title is likely unavailable. Email or call for price and availability.
The twentieth volume in the renowned ekphrasis series, this collection of Virginia Woolf’s writings on the visual arts offers a whole new perspective on the revolutionary author.

Despite wide interest in Woolf’s writings, and in the artists and art critics in her Bloomsbury circle, there is no accessible edition or selection of essays dedicated to her writings on art. This volume collects her longest essay on painting, “Walter Sickert: A Conversation” (1934), alongside shorter essays and reviews, including “Pictures and Portraits” (1920) and “Pictures” (1925).

These formally inventive texts reveal the centrality of the visual arts to Woolf’s writing and vision. They show her engaging with contemporary debates about modern art and are innovative in their treatment of ideas about color and form, including in response to the work of her sister, the painter Vanessa Bell, who designed many of her book covers and jackets. In these essays and reviews, Woolf illuminates the complex and interdependent relationship between the artist and society, and reveals her own shifting perspectives during decades of social and political change. She also provides sharp and astute commentary on specific works of art and on the relationship between art and writing.

An introduction by Claudia Tobin situates the essays within their cultural contexts.
Virginia Woolf (1882–1941) was one of the major literary figures of the twentieth century. In addition to her groundbreaking novels, she was an admired literary critic and authored many essays, letters, journals, and short stories. With her husband, Leonard Woolf, she founded the Hogarth Press, which would publish some of the most important modernist texts of the twentieth century, including her own.

Claudia Tobin is a writer, literary critic, curator, and art historian specializing in the relationship between modern and contemporary literature and the visual arts. She is the author of Modernism and Still Life: Artists, Writers, Dancers (2020) and coeditor of Ways of Drawing: Artists’ Perspectives and Practices (2019). She worked on two major exhibitions exploring Virginia Woolf’s life and art, Virginia Woolf: Art, Life and Vision (National Portrait Gallery, 2014) and Virginia Woolf: An Exhibition Inspired by Her Writings (Tate St. Ives, Pallant House Gallery, and Fitzwilliam Museum, 2018), and has curated numerous exhibitions on contemporary artists. Tobin was awarded a Leverhulme Early Career Fellowship at the University of Cambridge in 2017 and is a senior research associate at the Intellectual Forum, Jesus College, Cambridge. She is also a visiting fellow at the Institute of Advanced Studies, University College London.
“Woolf analyzes paintings and films with unleashed imagination. Her writing on art is a space to reflect, conjecture, and explore, and offers a fascinating glimpse at a period when art’s look and meaning were shifting rapidly”
— Hyperallergic