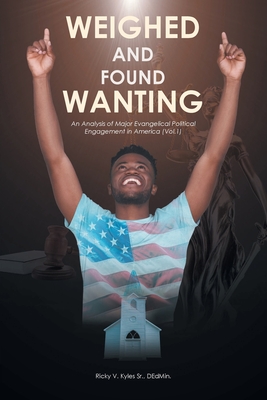 Dr. Ricky Verndale Kyles Sr. writes as one who understands all too well that he is pushing against strong and passionate tides in the African American Evangelical community. He has the full awareness his theological reasoning regarding proper Evangelical political engagement is clearly the Minority Report in the African American Evangelical community. Yet he understands the stakes are high (salvation for some and loss of rewards for others), and strongly believes the truth of any matter can never be determined by counting noses.

Many do not realize that when the Bible speaks of glory, it connotes the idea of weight or heaviness. Certainly not in the sense one would think of an object made of lead. No, when we speak of weight in theological terms, we refer to matters of supreme importance and substance. No one ever wants to be considered a lightweight, and no one ever wants to be told they do not measure up or that they come up short. Yet this is precisely the charge Dr. Kyles is laying at the feet of many in the African American Evangelical community.

Despite their verbal affirmations of fidelity to the Lordship of Jesus Christ, to the tune of 88-94 percent, African American Evangelicals continue to align themselves politically with a political party that (1) endorses the slaughter of life in the womb on demand (2) redefines the traditional understanding of marriage as one man and one woman for natural life and (3) embraces the radical rejection of gender binary identification.

Dr. Kyles understands, like the saints of old would say, "it is getting late in the evening, and the Sun is quickly going down." Dr. Kyles believes it is quite possible if it has not already happened, that the African American Evangelical community will usher in an unparalleled time of God's strong hand of discipline for their complicity in the social areas of abortion, marriage, and gender UNLESS there is genuine repentance. It must be repentance that bears and manifests real fruit. The desired repentance did not materialize with the national elections in 2020, so now we divert our attention to the mid-term election in 2022 and beyond as the Lord tarries His coming. There remains time due solely to God's benevolence, but there must be a profound sense of urgency. Unless that happens, I regret God will find many in the African American Evangelical community Weighed and Found Wanting.