Cider Planet: Exploring the Producers, Practices, and Unique Traditions of Craft Cider and Perry from Around the World (Hardcover) 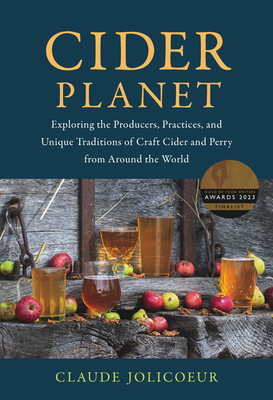 Cider Planet: Exploring the Producers, Practices, and Unique Traditions of Craft Cider and Perry from Around the World (Hardcover)

In Cider Planet, Claude Jolicoeur--a longtime, passionate cider maker and author of the international bestseller New Cider Maker's Handbook--takes readers with him to the world's greatest cider regions, providing an expertly guided tour laced with his deep understanding and appreciation for how this "Prince of Beverages" is made.

Cider, long perceived as a European country drink, is now truly a worldwide culinary delight. Jolicoeur talks about new and emergent regions that have contributed to this growing appreciation, and how they are building upon the old traditions while creating their own new ones. He explores, for example, the most revered areas for making perry, a delightful but little-known drink that, like cider, is starting to gain fans young and old. And he even transports readers to Kazakhstan in central Asia, famous as the "birthplace of the domestic apple."

Real cider, craft cider, farm cider, artisan cider: Whatever you wish to call it, at its best, cider should be enjoyed like a fine wine, with all of the sophistication but less of the pretentiousness. Just as there are many volumes devoted to the great wine regions of the world, we now need a "cider appreciation" manual to fully understand and delve into the rich culture of cider and perry. Cider Planet is that book, and Claude Jolicoeur is our experienced and enthusiastic guide. For the traveler or foodie, this book transports the reader around the world with wonderful stories and insight that will leave you thirsty for a fresh glass of fermented fruit.

A mechanical engineer by profession, Claude Jolicoeur first developed his passion for apples and cider after acquiring a piece of land on which there were four rows of old abandoned apple trees. He started making cider in 1988 using a "no-compromise" approach, stubbornly searching for the highest possible quality. Since then, his ciders have earned many awards and medals at competitions, including the prestigious Great Lakes Cider and Perry Competition (GLINT). He is the author of the New Cider Maker's Handbook (2013). Claude actively participates in discussions on forums like the Cider Digest, and is regularly invited as a guest speaker to festivals and events such as Cider Days in Massachusetts and the Common Ground Country Fair in Maine. He lives in Quebec City.