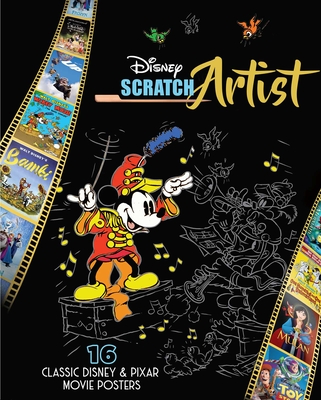 
Available in Warehouse. Wait for Email Confirmation for ETA
Bring 16 classic Disney and Pixar movie posters to life by etching away the lines to reveal the color underneath!

Scratch Artist features 16 movie posters from beloved Disney and Pixar animated films—from Cinderella and Peter Pan to The Little Mermaid, Toy Story, Up, and more. Use the included stylus to scratch away the black layer and reveal bright, bold colors of the poster underneath! An introductory section describes how to etch your masterpiece, as well as fascinating history and details of the films and their posters. By revealing color in key areas and leaving other areas unetched, you’ll wind up with one-of-a-kind stunning artworks that can be displayed on your wall.
Bill Scollon is an award-winning author and media producer with more than thirty years of experience creating entertaining and enlightening content for kids on screen, on stage, and on the page. He has written over 75 children's books for Disney, Pixar, Dreamworks, Studio Fun International, and more. Bill's early years were spent touring puppet and costumed-character shows as part of the family business. His move into media production led to a career at Disney that spanned two decades. Bill and his wife Barbara make their home in Atlanta, Georgia. They have two sons, Alex and Justin, and Max, a Boston Terrier.