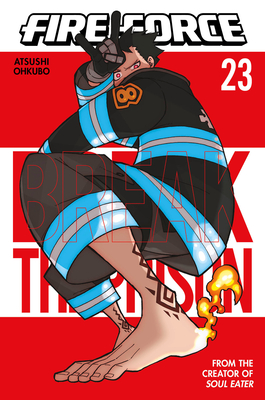 This is book number 23 in the Fire Force series.

As the members of Company 8 battle for their lives with ﬂames and ﬂexing pecs, a mysterious ally swoops in to give them hope. Hot on the trail of the doppel-ganger mystery, Princess Hibana returns to St. Rafﬂes Convent, where she discovers something that torches everything she thought she knew about her past. Arthur, meanwhile, embarks on an important quest, where he encounters....guess who?
Atsushi Ohkubo made his manga debut in 2001. In 2004, he created Soul Eater, which would run for seven years and become an international bestseller, later adapted into a hit anime broadcast on Cartoon Network. Fire Force is his first manga for Kodansha Comics.