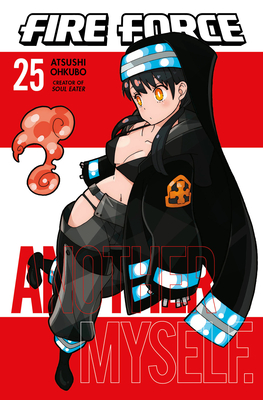 This is book number 25 in the Fire Force series.

THE GREAT CATACLYSM IS NIGH!

It’s “all hands on deck” as a gargantuan Infernal appears in the ocean alongside a mysterious pillar. As the Evangelist’s calamitous plot enters its final phase, all forces converge on the Tokyo Empire coastline–Fire Force, Haijima, and White Clad. Meanwhile, Shinra makes an Adolla Link with the aid of an unlikely partner, allowing him to glimpse something truly shocking. What truth lies behind the towering pillar and the Great Cataclysm? What fate awaits the world and mankind?!

Atsushi Ohkubo made his manga debut in 2001. In 2004, he created Soul Eater, which would run for seven years and become an international bestseller, later adapted into a hit anime broadcast on Cartoon Network. Fire Force is his first manga for Kodansha Comics.