Whisper Me a Love Song 5 (Paperback) 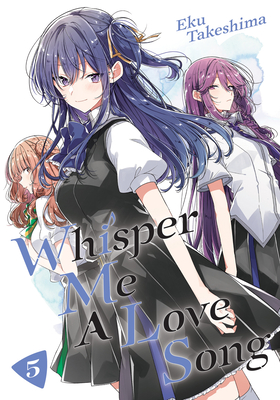 Whisper Me a Love Song 5 (Paperback)

This is book number 5 in the Whisper Me a Love Song series.

An adorable new yuri manga for fans of Kase-san and Yamada and Bloom Into You. One day, high school girl Himari sees a girl, Yori, sing in a band, and it awakens feelings she doesn't understand... but Yori does!

What do you do when your friends just can’t get along with each other?


Himari and Yori are settling into their relationship, but there’s still tension in the air—tension, that is, between SSGIRLS and Lorelei, the band Shiho joined after she acrimoniously quit SSGIRLS. Aki remains bent on finding out exactly why Shiho left so abruptly and angrily, but she doesn’t always ask in the most delicate way—and Shiho doesn’t seem interested in opening up. When Shiho and Himari unexpectedly bump into each other, Shiho shares a bit of her hidden past. It gives Himari an idea, but will it help heal the rift between the two former friends, or make things even worse?
Eku Takeshima is a yuri manga artist who debuted in 2015. Whisper Me a Love Song is Takeshima's first manga to be published in English.