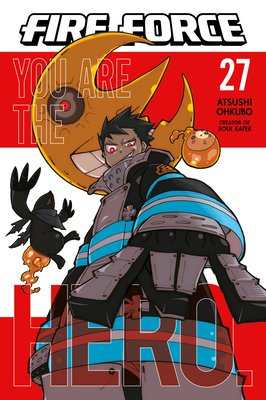 This is book number 27 in the Fire Force series.

CALLING ALL HEROES AND ANGELS

While investigating the mysteries of the Kusakabe family with Arrow, Shô makes an Adolla Link and encounters his mother, Mari, who has become an Infernal. What conclusions will Shô draw after learning the truth about his birth?! Meanwhile, an eighth pillar appears off the coast of Tama Bay. As the Empire despairs, the enormous figure of Raffles I descends upon the earth. The people fear divine retribution as Faerie blocks Shinra’s path. It’s time for Shinra to show what a hero can do!

Atsushi Ohkubo made his manga debut in 2001. In 2004, he created Soul Eater, which would run for seven years and become an international bestseller, later adapted into a hit anime broadcast on Cartoon Network. Fire Force is his first manga for Kodansha Comics.