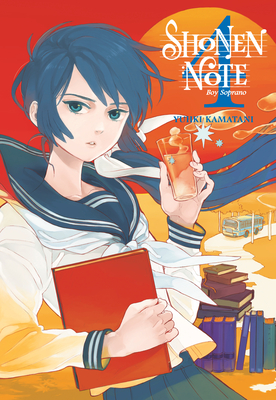 This is book number 4 in the Shonen Note: Boy Soprano series.

A poignant coming-of-age series that's moving and musical from the creator of Our Dreams at Dusk: Shimanami Tasogare! Yutaka is a boy treasured by his choir for his beautiful, soprano voice. But what will he do when the inevitable arrives, and his voice starts to deepen? Perfect for fans of Kageki Shojo!!, Keep Your Hands Off Eizouken, Blue Period, and Boys Run the Riot.

Yutaka Aoi is sweet, sensitive, and loves singing…so much so that he can’t help but be brought to tears whenever he listens to beautiful music. He also has a talent few boys have: he can sing soprano. So when Yukata overhears his middle school’s choir group perform, he can’t resist joining in. Inspired by the angelic sound of Yukata’s voice, the choir eagerly accepts him into their ranks. But when Yukata’s voice begins to change as he enters puberty, the journey ahead will be one of self-discovery and reflection for not only himself, but also for those around him.

Yuhki Kamatani is a Japanese manga writer and artist best known for Nabari no Ou, Hiraeth: The End of the Journey, and Our Dreams at Dusk: Shimanami Tasogare. Shonen Note: Boy Soprano was a Jury Selection for the 17th Japan Media Arts Festival in 2013.