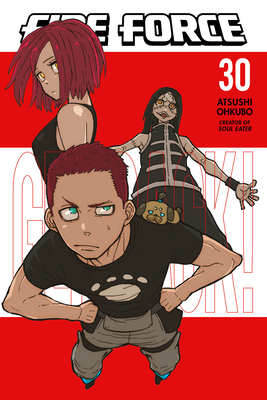 This is book number 30 in the Fire Force series.

The Great Cataclysm has begun! Deadly battle erupts across the land, pitting the Special Fire Force against the harbingers of destruction! A doppelganger of Rekka appears before Company 1, sparking new despair. Shaken by this cruel reunion, Karim will have to make a difficult choice. Meanwhile, Arthur and Vulcan face the ultimate test to get back to Yū, who has been possessed by Dr. Giovanni. The final confrontation between knight and dragon looms!
Atsushi Ohkubo made his manga debut in 2001. In 2004, he created Soul Eater, which would run for seven years and become an international bestseller, later adapted into a hit anime broadcast on Cartoon Network. Fire Force is his first manga for Kodansha Comics.