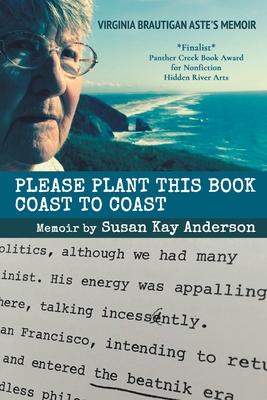 This book is the result of my meeting Virginia Brautigan Aste and sitting down and interviewing her over the course of six years. Our conversations continued as we built a friendship at our teaching jobs at a small school in Pahoa, Hawaii and by meeting for breakfast at the local cafe. What is in this book are essays, photographs, and Virginia's story. Her narrative highlights her years growing up in California and then her adventures before, during, and after being married to Richard Brautigan. Widowhood did not stop her from pursuing her own dreams and direction and we see how her survival became her life path in ways which added to the lives of others.

I met Virginia in 2008 when I changed high schools and began teaching at Pahoa High, after five years at Keaau High, on Hawaii's Big Island. She was a substitute teacher at the school and I asked her to be my sub/got into a conversation with her and she loaned me her copy of her daughter, Ianthe's, book, You Can't Catch Death. She said she noticed that I had "some good books" in my classroom (they were donations I got from a free box at my last job--from New Directions). She also said that she had been married to Richard Brautigan. I was so shocked, I didn't believe her--that's why she loaned me her daughter's book and of course I was instantly humbled and ashamed that I was skeptical about what she said. (Pahoa is very rural, isolated, and poor). I asked her if I could interview her about Richard Brautigan. She agreed and after these interviews were finished (published in Arthur magazine online https: //arthurmag.com/2009/12/25/virginia-aste/ and also in Beat Scene #62, 2010, "Oaxaca") I thought that her story was interesting and SKA1] also another way to understand/appreciate his writing, so I continued the project of interviewing her and then writing up my notes and recordings. I read his books growing up and also heard him read from Tokyo Montana Express in Eugene when I was starting my undergrad studies there. We had lived in Missoula, Montana and Polson, Montana. Eugene was our second home, too, because of weekends spent at an artsy caf building called Fifth Street Market.

This became Please Plant This Book Coast To Coast. It contains photographs, linoleum cut prints I made, Virginia's narrative, my essays, and samples of Virginia's research papers she wrote in college when she returned to study at age 50.

I taught in Pahoa until 2015 when we moved back to the mainland, to Eugene, Oregon. Virginia was my main substitute teacher and we stayed with her when we evacuated due to a hurricane in 2014--followed two weeks later by lava encroachment into town--so we missed the huge eruption in 2018 which overran our old neighborhood. I now live in Sutherlin and care for my parents. Virginia and I presented sections of Please Plant This Book Coast To Coast at the Oregon Poetry Society's Fall 2019 conference in Salem, Oregon.