On War (Three Volumes in One) (Paperback) 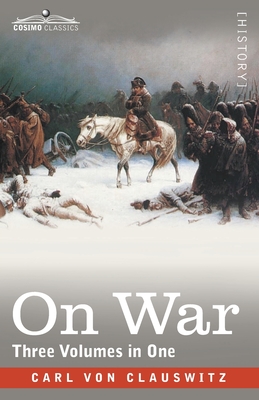 On War (Three Volumes in One) (Paperback)

"War is not merely a political act, but also a real political instrument, a continuation of political commerce, a carrying out of the same by other means." -Carl von Clausewitz, On War, 1832

On War is Carl von Clausewitz' masterpiece on war and military strategy, which was written between 1816 and 1830 and was published posthumously by his wife Marie von Clausewitz (n e von Br hl) in 1832.

Three main concepts of war stand out: war should be seen as an instrument of politics; the military objectives in war that support one's political objectives fall into two types: "war to achieve limited aims" and war to "disarm" the enemy; and the course of war will tend to favor the party with the stronger emotional and political motivations, but especially the defender.

This edition is the classical translation of On War (1873) by Col. J.J. Graham, with a preface by Marie von Clausewitz and the three main volumes of this work included in one book. A must-read for military historians and theorists, policy makers, and anyone interested in understanding the philosophy and concepts of war.