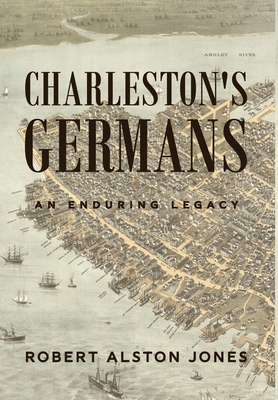 "A deep and dedicated investigation into how German immigrants assimilated in South Carolina up to the mid-20th century...The Charleston community is rendered with great care in this interesting historical account...If you think you know a city, think again-just below the surface, the history is vast." -Independent Book Review

"An engaging history of Germans in Charleston, South Carolina, and the fading of a cultural identity." -BookLife

By 1900, the German population in the United States was close to 2.7 million. In numerous cities in the Northeast and Midwest, those who had immigrated in the nineteenth century congregated in demarcated ethnic neighborhoods-"little Germanies." This was not the case of the German immigrant community in Charleston, South Carolina. The establishment and evolution of the nineteenth-century German immigrant community there was as unique as the southern Lowcountry city itself.

Early German-speaking immigrants had become settled Charlestonians by the middle of the eighteenth century, having founded the first German militia in America (the German Fusiliers), supported America in the Revolutionary War, and established themselves as successful merchants, a number of whom could be counted among the city's leaders.

By the middle of the nineteenth century, a new wave of German immigrants-primarily of North German origin-constituted an ethnic community that would become fully integrated with the southern host community by the turn of the century. These German-Americans and their descendants would nonetheless experience the anti-German animus that prevailed in the period before and after WWI. The ethnic heritage of Charleston's German-Americans, many of whom had contributed significantly to the city's rich social, cultural, political, and economic history, would be suppressed and denied to the extent that it almost completely disappeared.

Robert Alston Jones, a Charleston native and Emeritus Professor of German at the University of Wisconsin-Milwaukee, takes us back in time to this unique period in Charleston's history. He uncovers the vibrant and often surprising lives, contributions, and culture of the city's nineteenth-century German community of immigrants as it developed, matured, and transitioned into the twentieth century. He argues that the legacy of that ethnic community is still perceptible, if only infrequently acknowledged. He invites the reader to reflect on what it has meant to have had North Germans cross the Atlantic to settle in Charleston and become Charlestonians.