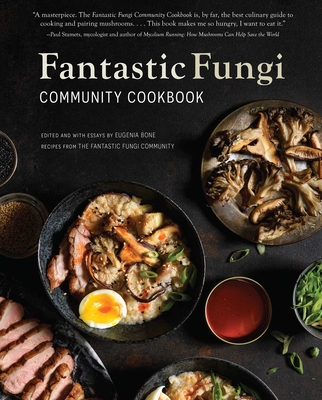 
Available in Warehouse. Wait for Email Confirmation for ETA
“A masterpiece. The Fantastic Fungi Community Cookbook is, by far, the best culinary guide to cooking and pairing mushrooms. . . . This book makes me so hungry, I want to eat it.”
—Paul Stamets, mycologist and author of Mycelium Running: How Mushrooms Can Help Save the World

"One of the best things about Fantastic Fungi Community Cookbook is the enthusiasm that exudes from every page. Even a mushroom moderate will find a recipe that excites curiosity." – Food52

THIS ONE-OF-A-KIND COMMUNITY-DRIVEN COOKBOOK, EDITED BY AUTHOR EUGENIA BONE, FEATURES OVER 100 MUSHROOM-CENTRIC RECIPES FROM APPETIZERS AND MAINS TO DESSERTS AND DRINKS.

The Fantastic Fungi Community Cookbook is written by the people who know mushroom cooking best—mushroom lovers! These are the kinds of recipes you will actually cook for dinner: tried-and-true, family recipes representing cultures from all over the world. Recipes include:

The cookbook also features fi ve thoughtful and engaging essays written by Eugenia that explore a wide range of topics, including mushroom cultivation and foraging. Following the path set by Louie Schwartzberg’s award-winning documentary, this cookbook will expand your appreciation of the fantastic world of fungi, their diff erent tastes and varieties, and their many applications, from flavoring drinks to replacing meat in recipes. The most diverse and comprehensive mushroom cookbook available, the Fantastic Fungi Community Cookbook is the perfect gift for anyone who is curious about the marvelous world of mushrooms and the magic they can make in the kitchen.
Eugenia Bone is an award-winning nature and food writer. She has published over six books, and her work has appeared in many outlets, including The New York Times, The Wall Street Journal, Saveur, and Food & Wine.