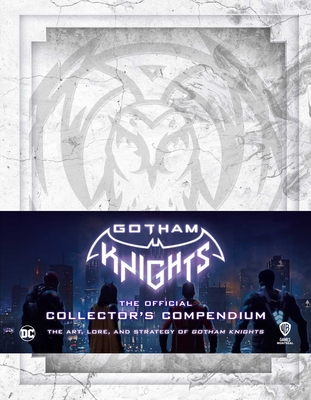 
Available in Warehouse. Wait for Email Confirmation for ETA
Gotham Knights: The Official Collector’s Compendium gives you exclusive behind-the-scenes content, stunning art, and the expert strategy you need to immerse yourself in the world of Gotham Knights.

Gotham Knights is the eagerly anticipated action role-playing game set in a dynamic, open-world Gotham City. Players take on the role of four playable characters: Batgirl, Nightwing, Red Hood, and Robin—each with their own unique style of combat and abilities—in their quest to protect Gotham.

This immersive Collector’s Compendium is the perfect companion for the dangerous streets of Gotham City. Go beyond the game with behind-the-scenes interviews with the Warner Bros. Games Montréal team, stunning concept sketches, renders, and illustrations, along with insider details on Gotham’s secret history and the elusive Court of Owls. Featuring detailed maps, in-depth character tactics, and expert strategy for facing the city’s most nefarious Super-Villains, this compendium gives you everything necessary to be the Super Hero Gotham City needs.
Michael Owen got his start at BradyGames in 1994 and transitioned into a full-time author in 2010. For almost a decade, he wrote numerous strategy guides for BradyGames and Prima Games. His guides include God of War, Destiny, The Last of Us, Tomb Raider, and Batman: Arkham Knight. He spends much of his time on his PC and Nintendo Switch, based out of the Indianapolis area with his wife, Michelle.

Sebastian Haley is a lifelong Pokémon trainer and the best-selling author of Playing With Super Power and 30 Years of Mega Man.