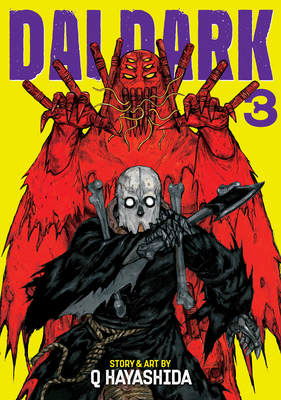 This is book number 3 in the Dai Dark series.

A WILDLY CREATIVE MANGA SERIES FROM THE CREATOR OF DOROHEDORO IN WHICH NECROMANCY, SPACE ACTION, AND DARK HUMOR COLLIDE!

Zaha Sanko is the most wanted man in the universe. They say that if you can take his bones, you’ll be rewarded with anything you might desire. That’s made no end of trouble for Sanko, who’s a pretty normal teenage dude (when he’s not killing people with an axe made out of pure darkness). Currently the prisoner of an ancient space cult, he’ll need everything he’s got to reclaim his freedom. Thankfully, he’s got three oddballs backing him up who just so happen to be the other most wanted men in the universe. Bizarre mayhem is just around the corner!

Don’t miss this hilariously twisted and gruesome series from the unique mind of Q Hayashida, creator of the manga and Netflix anime Dorohedoro!

Q Hayashida is a Japanese manga creator best known for her series Dorohedoro and Dai Dark.